Prado holeshotted both motos en route to a 1-3 scorecard, which was enough to secure him victory for the day ahead of moto two winner Tony Cairoli (Red Bull KTM Factory Racing).

Monster Energy Yamaha Factory MXGP duo Jeremy Seewer and Glenn Coldenhoff both had relatively consistent days, with the pair finishing third and fourth overall respectively thanks to 5-2 and 4-4 finishes.

Romain Febvre (Monster Energy Kawasaki) rounded out the top five courtesy of a 3-10 scorecard, while championship leader Tim Gajser (Team HRC) had his lead cut to 11 points as a crash in the second moto meant he could only recover to 15th, leaving him sixth overall for the round courtesy of 2-15 results.

Red Bull KTM Factory Racing’s Jeffrey Herlings was forced to miss the event, still recovering from a shoulder injury sustained in the opening moto at Oss.

In MX2 it was Red Bull KTM Factory Racing’s Guadagnini who took the overall, as 1-5 results were enough to see the Italian capitalise on his rivals’ inconsistencies and cut the points deficit to championship leader Maxime Renaux (Monster Energy Yamaha Factory MX2) down to two.

Renaux finished the day on 38 points, just three short of the overall victory, as a 2-5 scorecard was enough to see the Frenchman maintain the red plate heading into Lommel, while a moto two victory propelled teammate Thibault Benistant to third overall after a ninth in the first moto.

Australian Jed Beaton (Rockstar Energy Husqvarna) backed up his podium form from Oss to charge to third in moto one, however, an eighth in moto two saw him finish fourth overall for the round. Wilson Todd (Bike It MTX Kawasaki) notched a 7-11 scorecard for 10th overall in MX2.

The MXGP of Czech Republic marked the season-opening round for the FIM Women’s Motocross World Championship, which saw defending champion Courtney Duncan (Bike It MTX Kawasaki) take the overall with a 1-1 result, ahead of Shana van der Vlist in second with a 2-4 scorecard and Larissa Papenmeier (Team Yamaha Racing 423) in third with 7-2 finishes.

The next event on the MXGP World Championship calendar is the MXGP of Flanders-Belgium, which will take place at Lommel this coming weekend on 1 August. 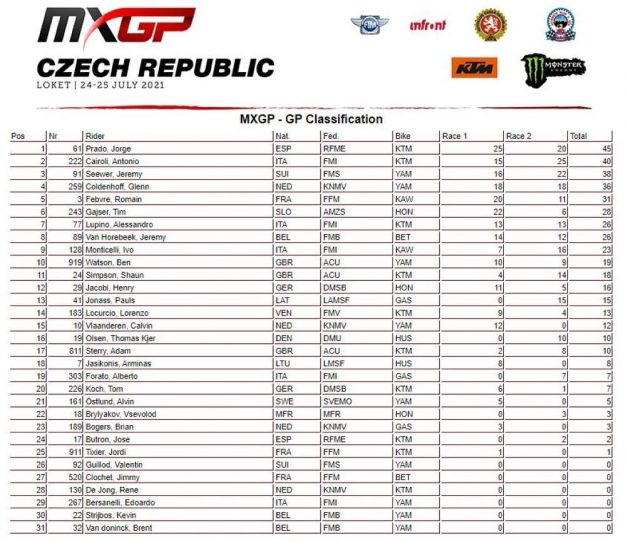 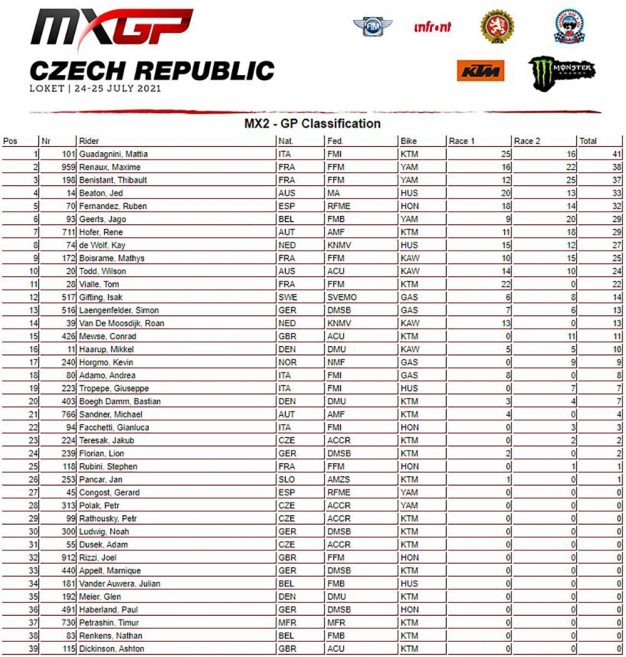