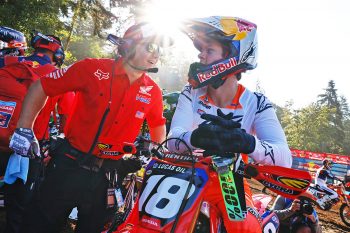 Lawrence was only able to salvage seventh position in moto one, as the 17-year-old’s main championship rival Cooper won the race.

However, the Team Honda HRC rider displayed strong mental fortitude in the second encounter, recovering from an early mistake to charge through the field and capitalise on a late mistake of Cooper’s own.

“It definitely boosts it up a bit,” Lawrence explained when asked about how the second moto podium attributed to his confidence.

“It’s been a rough few races and it’s good to get finally get a start for once – that’s just so much better… I actually got to see the front two, which was nice!

“I made a mistake on the first lap, which was okay, I was able to come back through and get second. I’m happy with that, hopefully, we can continue like that.”

It was a welcome return to the podium for Lawrence, who had momentum at the start of the season, but has been struggling to match the consistency of Cooper as the season’s progressed seeing him lose the red plate to the Yamaha rider at Spring Creek.

With two weekends off before the next round, Lawrence will be looking to use the confidence gained from his moto two performance at round seven to inspire his preparations for the back end of the outdoor season.

Lawrence now faces an eight-point deficit to Cooper, however, all is still to play for heading into the next round of the Lucas Oil Pro Motocross Championship at Unadilla, which will take place on 15 August.