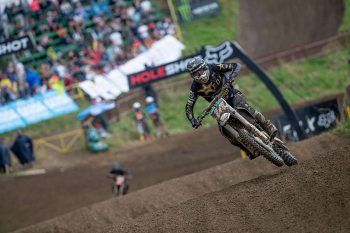 A podium result in the opening race at Loket carried Jed Beaton to fourth overall in the Czech Republic following a more challenging second moto.

Beaton had a pivotal first lap in the first outing, making quick work of his rivals to slice his way into third position by the end of the lap.

The 23-year-old’s charge didn’t stop there, as he then put the hammer down in an attempt to catch the race leaders, falling just short at the end of the race in third position, only 4.761 seconds down on race winner Mattia Guadagnini (Red Bull KTM Factory Racing).

Moto two proved to be more difficult for the Rockstar Energy Husqvarna rider to charge through the field, with the track not having as much grip making it challenging for Beaton to make passes, eventually finishing the race in eighth and leaving him with mixed feelings from the weekend.

“It was a bit of a mixed day with my results, which I’m not overly happy with, but to finish fourth overall, I’ll take that with a not so good second moto,” Beaton explained.

“In the first race I was able to make a lot of quick passes and moved into third early on and everything came really easy to me. Unfortunately, I couldn’t quite make the same passes in race two.

“The track was a bit slick after the rain, so it was hard to push and it was just a big battle throughout the top 10. It was frustrating trying to make passes while riding defensive, but overall, fourth is pretty decent and I’m leaving here healthy ahead of the next one.”

The podium in moto one marks Beaton’s third rostrum finish in four races and, courtesy of fourth overall at Loket, he now moves up to sixth in the MX2 championship standings.

With the Australian’s good form of late, it can be expected that he will push to charge further up the standings when the series continues at Lommel on 1 August for the MXGP of Flanders-Belgium.