In moto one, the first win of the year was earned by Sexton, carrying forward his form from last weekend and delivering the win by 3.461s over Eli Tomac (Monster Energy Kawasaki). Sexton managed to get out front early with a decisive holeshot and then controlled the moto from there.

Sexton was first chased by teammate Ken Roczen (Team Honda HRC), then Marvin Musquin (Red Bull KTM) and, finally, Tomac. It was Musquin who appeared to be on the charge mid-moto as he worked his way into P2, but a late mistake dropped him behind Tomac to third position.

The final moto of the day was a case of saving the best for last, as Ferrandis and Tomac went head-to-head in the fight for victory – a move that would have secured Tomac the round.

It was Ferrandis who jumped out of the gates and controlled the moto from lap one, before a familiar late charge from Tomac saw him close to within striking distance with two laps to go.

The stage was then set for a final lap battle for the win, Ferrandis putting in his quickest time of the moto to hold on and finish 4.512s clear by the end, as Tomac relented after losing ground in the closing moments.

What that meant was that third position was enough for Sexton to hang onto the overall in his first of the year, with Plessinger and Musquin the top five. Holeshot winner Webb improved for sixth-place in the second outing, followed by Barcia, Savatgy and Roczen, who lost further ground in the title race.

For the round it was Sexton who took victory ahead of Tomac and Ferrandis, who continued his perfect overall podium streak, while in the points, Ferrandis now leads Roczen by 47 points, with Tomac climbing to third and now within seven markers of Roczen. Cooper had been in position to win the round and take a healthy points advantage into the upcoming two-week break, but instead it was Martin on top of the box.

As the gates dropped on 250MX moto one, an opening turn crash involving Jo Shimoda (Monster Energy Pro Circuit Kawasaki) and Jalek Swoll (Rockstar Energy Husqvarna) saw the latter exit the race, while out front it was Carson Mumford (FXR Chaparral Honda) who captured the holeshot.

A resurgent Mumford managed to hold onto the lead for the opening three laps in an inspired effort, however, it was new red plate-holder and top qualifier Justin Cooper (Monster Energy Star Racing Yamaha) who would storm his way into the lead.

Cooper was followed almost immediately by RJ Hampshire (Rockstar Energy Husqvarna) by Mumford into P2 and that’s the way it would remain, Cooper holding Hampshire out by 2.824s across the finish.

Mumford, meanwhile, would eventually finish in 11th position, while Shimoda remounted and clawed his way back to 24th by the end of the moto.

Victory from Martin in the second 250MX moto saw him claim back-to-back overall wins, but it wasn’t before a major shake-up in the closing laps that the result went Martin’s way.

Early leader and also points-leader Cooper was in position to take second in the moto with two laps remaining, which would have handed him the round, but a heavy crash up Horsepower Hill bumped him way down the order to P8 and fortunate to finish altogether.

What that did was enable Martin to cruise to a 11.837s advantage over Jett Lawrence, who himself had put on a brilliant charge through the pack into position to capitalise on Cooper’s incident.

Another strong ride from Hampshire earned him P3, whole Brown was again impressive for fourth place and Shimoda rebounded to take fifth this afternoon.

Sixth through 10th was Dilan Schwartz (BarX Chaparral Ecstar Suzuki), Mosiman, Cooper, Austin Forkner (Monster Energy Pro Circuit Kawasaki) and Hunter Lawrence, who had to recover from an early crash of his own. Nichols was a late casualty, crashing out in the closing laps on the moto.

Overall, Martin made it two in a row from Hampshire and Cooper, who salvaged a podium despite his second moto struggles. In the standings, Cooper maintains the red plate ahead of Jett Lawrence, now eight points separating the pair.

Next on the 2021 Lucas Oil Pro Motocross Championship schedule will be Unadilla on Saturday, 14 August, following two weekends off in the mid-season break. 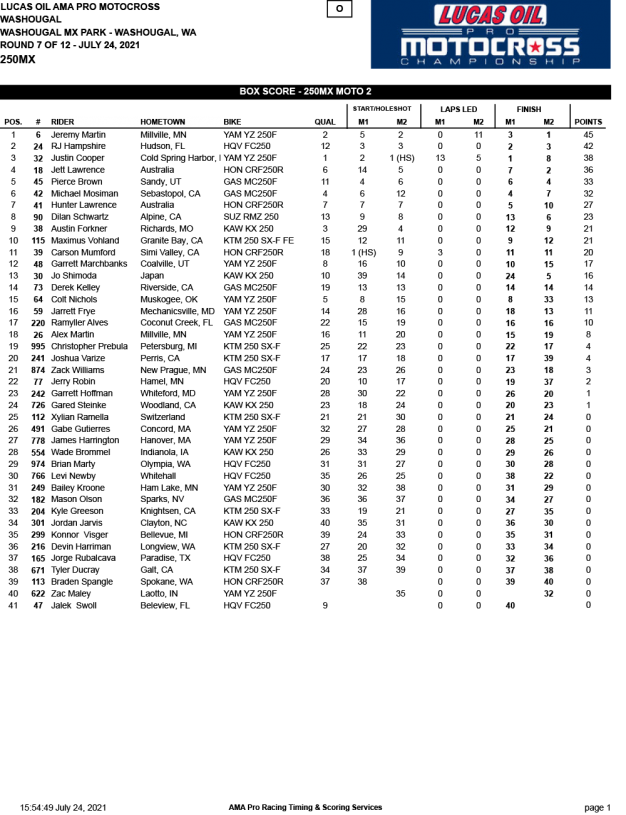