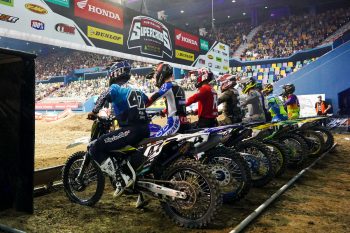 Plans are still in place for the 2021 Australian Supercross Championship to run in full despite increased uncertainty this season.

A number of Covid-19 outbreaks have grappled the east coast of the country, throwing the domestic racing season into chaos after Motorcycling Australia (MA) was forced to postpone its Queensland ProMX events alongside the already postponed Gilman and Wodonga rounds.

The Australian Supercross Championship was set to be made official last month, however that announcement has been delayed amid the resurging pandemic across the nation.

“Plans are still in place for a five-round championship,” Bailey confirmed. “As of right now, that’s what we’re working towards – it’s all coming together really well – and we’re working with MA on the motocross situation to make sure it’s as convenient as it can be for teams.

“Obviously, as the season gets compressed, we want to make sure we’re working together collaboratively to make sure the two championships work together.”

The outlined commencement date of AUS Supercross is pencilled in for 16 October, while the next round of ProMX is scheduled for 4-5 September in South Australia – making it a very strong possibility the series’ will overlap with the Wodonga, QMP, and Coolum rounds still to be rescheduled.

It was confirmed in May that AUS Supercross is set to undergo a number of changes in its return season, where a new group of event promoters will be introduced, along with the addition of a naming rights partner and a free-to-air television package.