All 17 stops to be held on Saturday with crowds at full capacity. 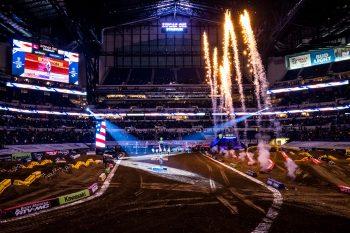 The 2022 Monster Energy Supercross schedule has been announced with all 17 rounds to take place on Saturdays, as crowds at every venue are slated to return to full capacity.

While the season-opening round returning to Angel Stadium in Anaheim was previously announced, the entirety of the schedule was kept under wraps until this afternoon.

A return to normalcy is set for 2022, following two seasons marred by the Covid-19 pandemic, with all 17 rounds slated for Saturday and no limit on attendance at any of the venues.

Kicking off the season will be the infamous Angels Stadium in Anaheim, which will also play host to round four of the championship and is the only city on the schedule that will host multiple rounds.

Ford Field in Detriot, Michigan will return to the series on 12 March, after falling off the schedule during the last two seasons. Also making a return will be Lumen Field in Seattle, Washington, the race scheduled for 26 March.

Salt Lake City Utah’s Rice-Eccles Stadium, which has seen the most action of any venue over the last two seasons as it hosted the final seven rounds of the 2020 championship and the final three of 2021, will return as the season finale on 7 May.

After playing host to multiple rounds of the 2021 championship, Houston is missing from the schedule for 2022, along with Las Vegas, which played host to the finale for many years.

The events will also return to hosting FanFest per usual at every round with the exclusion of Minneapolis and Detroit, with ticket details will be announced at a later date.