Ruprecht salvages pair of top fives in EnduroGP of Estonia 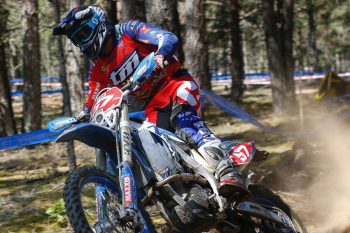 Wil Ruprecht has overcome a crash on stage one of Estonia’s third round of the 2021 Borilli FIM EnduroGP World Championship to salvage a pair of top five finishes across both days of racing.

The TM Boano Factory Racing rider pushed through to finish fifth in the outright standings despite the setback during Saturday’s opening stage, where he was credited second in the E2 category.

He bounced back on Sunday for another P5 outright score and runner-up in E2, which now sees him lead the category standings by five points.

“A big thank you to the TM Boano Factory for the words of encouragement to see this weekend through,” Ruprecht commented.

“A crash on Saturday hurt our chances of a great result, but nevertheless, we salvaged what we could and are in one piece heading into Sweden next weekend. A few more tools acquired this weekend to go in the toolbox.”

Ruprecht is ranked third in the outright championship standings as the series heads to Sweden this weekend for the fourth round.