Dominant day in Pro Motocross at Millville for Jeremy Martin. 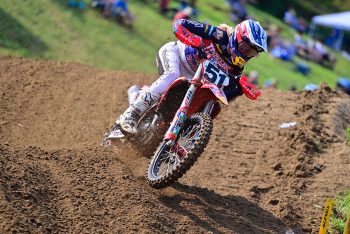 Round six of the 2021 Lucas Oil Pro Motocross season provided some incredible racing as Justin Barcia went 1-2 for the overall win at Spring Creek.

In a day that saw both title contenders face adversity, Barcia was able to capitalize and take his first overall win since 2018, a first win in the premier class for the TLD Red Bull GasGas team.

In moto one, Barcia grabbed the holeshot and managed to lead every lap of the moto, but it wasn’t without pressure throughout. In the early stages, Adam Cianciarulo pressured him, but Cianciarulo would make a mistake just past the halfway mark.

The story of the moto, however, was Ken Roczen hitting the ground in the opening corner, getting run over, unable to remount and finish the moto, dropping him to 39 points behind Ferrandis in the standings.

The Team Honda HRC man didn’t let it phase him in moto two though, as he grabbed the lead from Barcia in the opening lap and never looked back. Ferrandis had his first bit of adversity of the season, as he crashed with his teammate Aaron Plessinger in the opening lap.

In the end, Roczen grabbed the moto win as Barcia settled into second place to take his fourth career overall win ahead of Eli Tomac who went 3-4, and Ferrandis who recovered for a 2-5 finish and third overall.

Chase Sexton (Team Honda HRC) had a solid day after a rough start to the season, going 7-3 for fourth overall. Sexton is looking to turn things around as the series heads into the second half.

Fifth on the day for the second weekend in a row went to Christian Craig. The Monster Energy Star Racing rider notched 4-6 finishes on the day, continuing to prove he’s got solid form going so far this season.

Just behind him was his teammate Plessinger who went 5-9 on the day. Plessinger recovered well in moto two following his crash with Ferrandis in the opening stages. Marvin Musquin (Red Bull KTM) took 8-8 on the day to finish seventh.

Roczen’s moto two win propelled him to eighth overall, his scores on the day were 40-1, putting him in front of Joey Savatgy (Rocky Mountain ATV/MC who went 11-7, running up front in moto two, battling for fifth throughout.

The final spot in the top 10 went to Dean Wilson (Rockstar Energy Husqvarna) with a pair of 10th places, taking his second top 10 in a row after ninth last week at Southwick. 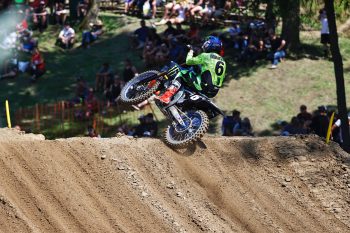 Hometown hero Jeremy Martin took his first overall victory of the season in 250MX action, dominating the day with 1-1 finishes in round six of the season at Spring Creek.

As his season continues to be marred by injury, Martin battled hard at his family’s track in Millville, Minnesota to take back-to-back moto wins.

In moto one, Justin Cooper (Monster Energy Star Racing Yamaha) grabbed the holeshot with Michael Mosiman (TLD Red Bull GasGas), Max Vohland, and Martin just behind. Points leader Jett Lawrence (Team Honda HRC) got his day started on the wrong foot early, buried in the pack outside of the top 15 early on.

Cooper maintained the lead through most of the moto, but Martin made a push with five minutes to go, catching and passing his teammate, eventually winning by over seven seconds from Cooper, while Mosiman notched his first podium of the season.

Rounding out the top five in the moto were the Lawrence brothers, with Jett recovering to fourth just ahead of older brother Hunter in fifth.

Moto two saw plenty of drama, but there was none at all for Martin, as he grabbed the holeshot and was never challenged. As the race got underway, however, Pierce Brown (TLD Red Bull GasGas) crashed out of fourth, collecting six riders in the process in a massive pile-up, one of them being Jett Lawrence.

At the front, Martin grabbed the victory and the overall, with Mosiman eventually finding his way through on Cooper in the later stages of the race to take second overall on the day.

Cooper’s 2-3 finishes saw him finish third overall on the day, taking the lead in the championship standings in the process. He now leads Jett Lawrence, who finished fourth overall with 4-6 scores, by six points.

Fifth overall went to Hunter Lawrence with 5-5 finishes, after starts held him back from repeating his winning effort from last weekend.

An impressive recovery from outside of the top 30 in moto two saw Jo Shimoda (Monster Energy Pro Circuit Kawasaki) finish seventh overall with 8-9 finishes, besting teammate Austin Forkner in eighth after his best ride of the season in moto two, going 17-4 on the day.

FXR Chaparral Honda rider Carson Mumford found his way into the top 10 for the first time this season, taking ninth with 14-8 finishes. As Jalek Swoll battled for 12-10 on the scorecard to finish 10th overall.

Cooper now takes over the red plate as the series heads to Washougal for round seven of the championship in Washington next Saturday. 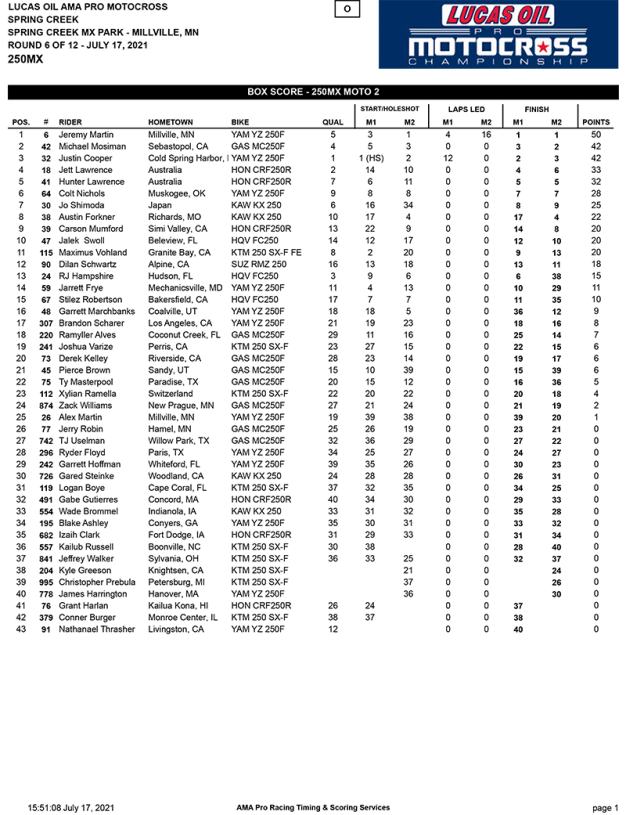