Vialle to sit out Dutch GP in continued recovery 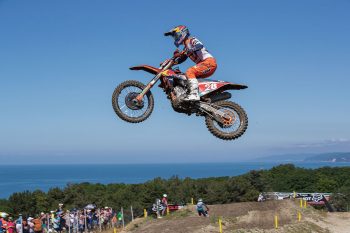 Red Bull KTM Factory Racing’s Tom Vialle will be unable to compete in round four of the MX2 World Championship at Oss as he continues to recover from a hand injury.

The confirmation marks another major blow in the French rider’s title defence as he takes increased time to get his injury back toward 100 percent.

The MXGP of The Netherlands is now the third event in succession Vialle will be unable to complete, with a practice accident in the lead up to Matterley Basin causing a fracture in his right hand, forcing him to the sidelines for the MXGP of Great Britain and subsequently leaving him unable to finish in Italy.

Doctors have advised the Frenchman that the fracture is nearly healed, but further stress could severely impact the complete recovery of the bone.

“The Grand Prix in Oss came just a bit too soon”, Vialle explained. “The bone has not healed 100 percent, so we still need to wait a little before practising and racing again. We will make another check-up next week and I hope to ride in Loket.”

The MX2 world champion started his title defence in fine form winning the opening round of the season in Russia, but now faces a monumental hurdle to overcome if he is looking to make it back to back championships.

It will be critical that Vialle can make his return at round five at Loket if he is to keep any hope of his championship defence alive, as he already trials teammate and championship leader Mattia Guadagnini by 63 points – that deficit to be further increased with his absence from the Dutch GP.