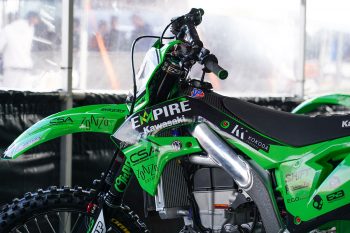 Empire Kawasaki is looking to the commencement of this year’s Australian Supercross Championship to debut the latest 2022 model KX450.

While the Victorian outfit will see out the remainder of the 2021 Penrite ProMX Championship onboard 2021 machinery, the team is preparing the latest relatively unchanged variant.

“We are planning to have the new bike ready for round one of Supercross”, Empire Kawasaki team manager Tyson Cherry explained when contacted by MotoOnline, clarifying that it won’t be used in ProMX despite being built into a race bike at the moment.

Wodonga’s recent postponement marks the second event on the ProMX calendar to be pushed back and, while the Australian Supercross Championship is expected to start on 16 October, a venue has not yet been formally announced.

The ProMX season has provided mixed fortunes for the team’s MX1 rider Jayden Rykers, with steady progress being made on the KX450 from rounds one to two before Rykers was forced to miss the Maitland round due to a hard border closure imposed by the WA government.

After Wodonga’s postponement, the next round of the championship is not scheduled until 8 August at QMP. Instead, the Kawasaki-supported team will now be looking to make the most of the extended break to get some state championship racing and testing in to prepare for a strong second half of the season.

“Jayden will be flying in and racing [Victorian] state titles,” Cherry added. “We are just trying to get as many races as we can under our belt. We will be testing a little bit more, dialling in the suspension with On Point… essentially it’s just more time for riding.”

Ongoing covid restrictions and regulations have already resulted in multiple ProMX events being put on hold. A swift and seamless transition coupled with riders and teams adaptability could prove vital with a high likelihood of a quick turnaround between motocross and AUS Supercross seasons.