Crisis averted for Ferrandis in fourth victory of the season. It was a dominant day at Southwick for Hunter Lawrence as he took both moto wins for his first overall victory of the season in round five of the 2021 Lucas Oil Pro Motocross season.

After five inches of rain fell on the circuit throughout the week, the racing surface shaped up well for an epic day of racing in Massachusetts.

Hampshire’s trend of crashing continued on from Redbud, hitting the ground allowing Mosiman through to the lead.

Moto two saw an equal amount of action and more of the same from Hampshire who grabbed the holeshot and got out to a big lead but he’d hit the ground twice, leaving Cooper with the lead and Hunter Lawrence in tow.

Lawrence eventually caught Cooper out front with under 10 minutes to go in the moto, catching and passing him for the eventual win and overall victory.

Shimoda ended up second overall with 3-4 moto scores, taking a career-first Pro Motocross overall podium as he continues to progress in 2021.

Cooper’s 6-2 moto scores put him third overall on the day as he would gain five points in the championship, closing the gap to Jett Lawrence to just three.

Fourth on the day went to Hampshire, going 2-6 in a frustrating day, after crashing twice in both motos. Colt Nichols (Monster Energy Star Racing Yamaha) rounded out the top five after going 4-5 in the motos.

Jett Lawrence had what was his worst finish of the season. After opening moto struggles saw him finish ninth, he recovered well in moto two to finish third to take sixth overall.

Mosiman proved throughout the day that he has the speed to run up front, leading at one point in the day, eventual issues caused him to finish 7-7 on the day for seventh overall as he continues to look for his first podium of the season.

Stilez Robertson continues to have solid rides aboard his Rockstar Energy Husqvarna, notching 8-8 scores for eighth overall on the day, finishing just ahead of Swoll who finished 5-17 on the day.

Rounding out the top 10 and notching his second top 10 in a row was Pierce Brown (TLD Red Bull GasGas) who went 13-10 on the day.

Jett Lawrence still leads the championship by three points over Cooper, as the series heads to Spring Creek next weekend for round six. After having to nurse his bike throughout the second moto at Southwick, Monster Energy Star Racing Yamaha rider Dylan Ferrandis extended his winning streak to three in a row.

In what could have been a catastrophic day for his championship hopes, Ferrandis managed to salvage 1-3 on the day, with his bike smoking throughout the opening laps of the second moto.

As the gate dropped in the opening moto, Ferrandis rocketed out of the gate to take the lead, going on to win in a fairly quiet moto ahead of Justin Barcia (TLD Red Bull GasGas) and Aaron Plessinger (Monster Energy Star Racing Yamaha).

The second moto, however, was packed with action, as Ferrandis’ title rival grabbed the holeshot and checked out early as Ferrandis charged from outside of the top five with Tomac in tow.

As his bike began to smoke, a mistake by Ferrandis allowed Tomac by and into second, while the Star Racing team began to give Ferrandis signals about the bike, forcing him to ride without using the clutch for much of the race.

Tomac wasted no time going forward, lapping four seconds a lap faster to chase Roczen down from over seven seconds out, catching and passing him to take the lead and eventual win.

Ferrandis maintained third to take the overall, never pushing the issue and avoiding what would have been a devastating blow to his championship if he had retired from the race.

Second overall on the day was Roczen who notched 4-2 moto scores, only managing to lose five points on the day to Ferrandis in the title fight.

A 2-4 tally brought Barcia to his first overall podium of the season and first overall for the TLD Red Bull GasGas squad in their first season on the MC450.

Tomac’s first race struggles that saw him finish eighth left him fourth overall after his dominant moto two victory. He now sits third in the championship after Plessinger suffered a mechanical in moto two.

Fifth overall went to Cooper Webb (Red Bull KTM) giving him his best finish of the season as he clawed his way to 6-5 scores to finish just ahead of Adam Cianciarulo who went 5-6 for sixth overall.

Another tough day for Team Honda HRC rider Chase Sexton saw him finish 7-8, starts holding him back in the early going of the motos.

Marvin Musquin (Red Bull KTM) took eighth on the day by going 10-7. The Frenchman did however run up front early on in both motos.

Ninth on the day went to Dean Wilson who bounced back well from some internal bruising suffered at RedBud last weekend. The rider who has been hampered by Epstein-Barr virus through the early part of the season logged 12-9 scores.

Rounding out the top 10 was Joey Savatgy (Rocky Mountain ATV/MC) who continues to impress with his third straight top 10. 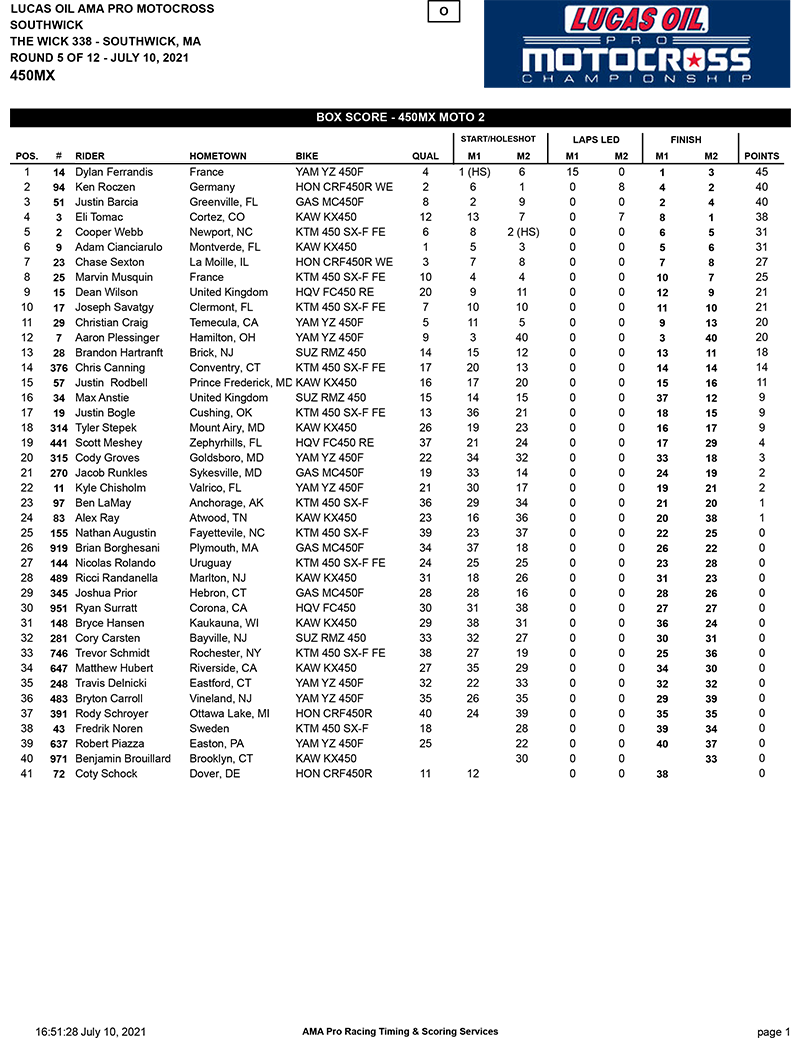