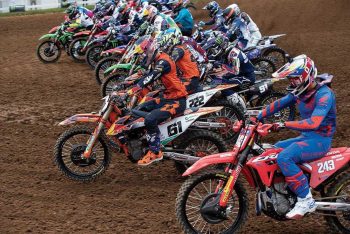 Infront Moto Racing are likely to make a decision on whether the 2021 Motocross of Nations (MXoN) will carry world championship points by the end of July.

The controversial policy could see MXGP and MX2 class riders improve their positions in the standings for the annual meeting on 26 September that is wedged between rounds 10 and 11 of MXGP.

The scheme arose last year both as a way of counting the Nations (which was canceled in 2020 due to the pandemic) – as an extra ‘GP’ but also to ensure that the top teams and riders take part in the event that is slated to occur in the compact setting of Mantova, Italy.

Implementing the idea is likely to prove problematic as some Grand Prix riders will not make the three-man squad for their country and some nations might not even be able to participate as Europe still tries to control the volatile pandemic.

“We are still in discussions. The two possibilities are on the table,” commented Infront Moto Racing CEO David Luongo. “What we want is to have the best riders available for the best event of the year.

“It’s still open but we will make a decision in the next month. We really want to have the Motocross of Nations back on the calendar in a good way because last year we missed it.

“We’d like to have a lot of public at Mantova and need to have the Federations making a selection of the best riders. We are discussing now with the manufacturers to understand their will regarding this.”

There was already talk in Maggiora and the MXGP of Italy last weekend of teams seeking clarification over the issue. The 2021 MXoN was given a boost however by news of proactivity by the AMA at RedBud for the fourth round of the Lucas Oil Pro National last weekend.

Officials were apparently talking to teams and riders for confirmation of an entry for Team USA. The MXoN’s September date is far more favorable to participants in the AMA series, coming just two weeks after their last race at Hangtown in California on 11 September.

The traditional end of September/early October slot for the Nations means it was a difficult addition to the busy American agendas, with sometimes the gap between the nationals and the 74-year-old competition up to a month apart.

“It’s very good,” Luongo remarked on the Team USA movements that could be a precursor to the race moving back across the Atlantic to North America in 2022. “We have a very good relationship with the guys over there now for some years now.

“We saw that with the 2018 Nations at RedBud and Roger [De Coster] has always committed to bringing a good team. We feel they are very motivated to come and compete, and we think we will be back very soon in the USA for the Nations.”

Luongo could not confirm if RedBud would be the destination for the third MXoN to take place on American soil since 2007: “The RedBud event was fantastic,” he continued. “So they are definitely on the shortlist, but it is still too early to announce something.”