Fresh off the back of winning the 2021 Hattah Desert Race outright, Daniel Milner has proven he is the man to beat when it comes to the Victorian event. The KTM Racing Team rider has now won Hattah three times and we caught up with the 29-year-old after his successful weekend to unpack all things surrounding it. 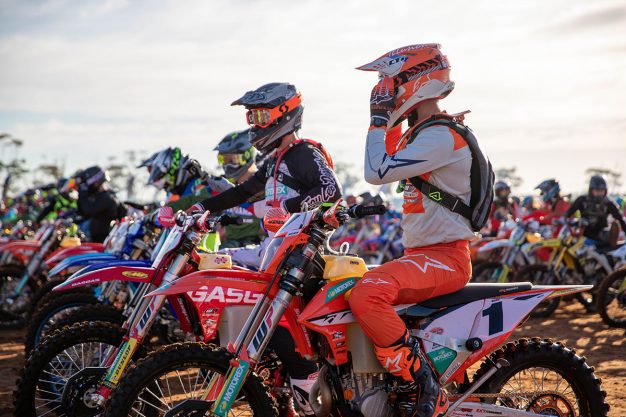 It was good hey, it was fun to be back racing at Hattah obviously last year missing out and then being able to bring home the prologue in the top 10 and be able to win that. It was an enjoyable race, and I’m absolutely stoked to come home with my third Hattah win, and make it back to back as the last time I raced at Hattah I won it and was able to do it again this year.

It was probably two of the funnest laps I’ve had for a long time, racing around with Mason. We were swapping positions and there was a bit going on – there were some moments going on between both of us – so it was pretty funny we kept looking back at one another and it was a good time, to be honest. Then our pitstops changed up and we both got to ride by ourselves, so that wasn’t as fun. I mean he was definitely pushing me the whole time, I would get the gap out to a minute or something like that then next minute he was within 20 seconds going into the last lap. I knew I had to step it back up again to make sure he wasn’t going to catch me and get by, but it was fun and enjoyable and it was good to have him there pushing me the entire time. Racing without anyone from your regular team…

We didn’t have Mick [Carusi] and the team, they were in lockdown and weren’t able to come. It was pretty hectic, we were lucky this week with the truck being driven down to Gol Gol and we went across the border to pick it up and bring it back down. Mick built it [the bike] so it was ready to go, we just had to run it in and make some minor changes and stuff like that. So it was definitely a little bit stressful I guess you’d say not having Mick there knowing everything he does, but I had Gilesey [Anthony Giles] from Choice Suspension, and I had a good crew fuelling me up. Those guys were on top of it and they smashed it out real quick and were able to get me back out on track. Everyone involved was a massive help setting everything up and doing everything we needed to go and win. Mason or I never had our mechanics, it was a little bit worrying not having those guys there, watching from home, but we still got the job done and that’s all that matters. We are excited to bring that win home for them.

I feel that it was nearly the roughest one we have had to be honest – it was gnarly. Thinking that there were less riders there I was thinking it wasn’t going to be that bad, but it was definitely real hard. But also the moisture was perfect –  you couldn’t ask for it to be much better, to be honest.