Overall winners Clout and Webster recall the third round in NSW.

While CDR Yamaha Monster Energy’s Luke Clout (MX1) and Honda Racing’s MX2 championship leader Kyle Webster continued their winning ways at the third round of the Penrite ProMX at Maitland, Clout snatched the championship-leading red plate and Webster’s race win streak was brought to a halt. MotoOnline tracked both riders down afterwards for Debrief interviews. 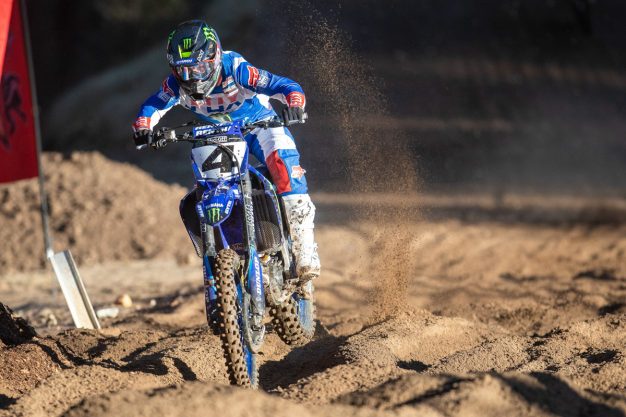 Luke, it was a great day for you yesterday, and you were clearly the fastest guy all day. You must be pretty happy with how it all went.

Yeah, it was really good. We kept the ball rolling from our round win at Canberra by taking Super Pole and two moto wins at Maitland. I also took over the championship lead and have the red plate now, which is a bonus on top of everything.

It seemed like you were in control most of the day, but were there any things that didn’t go as planned, as such?

Nothing major. Even though I qualified quickest before Super Pole I still felt kinda slow, so I came back in and debriefed with the team, and we made some changes to the bike before Super Pole. Those changes were bang-on. I felt really comfortable and put in quicker laps straight away, so hats off to the team for the correct call and providing me with a bike that was pretty much perfect. In the first two races I was able to control the race from the front from the first turn and maintain a buffer, and I knew that getting a race win in the back-to-backs was really important. In the third race I got a decent start, but Gibbs held me off out of the first turn. I managed to get onto the back of him again, but we actually made contact when I ran into his rear wheel on a single jump and I almost went down. I just played it smart from there – the track was deteriorating and nine laps around it was tough. I just wanted to play it smart and bring it home for the overall and maximum points.

On top of that you’ve already got your hands on the red plate. Considering you DNFed a moto at the opening round, did that happen sooner than expected?

Definitely. To have the red plate on my bike after two full rounds, after DNFing at Wonthaggi is crazy. I didn’t even realise that had happened when I came over finishline. When the team told me while we were celebrating it came as a real shock. Obviously getting the red plate has been the goal, but I didn’t think it would be on the bike this early. I’m stoked to be in this position so early in the season, but I’m not going to back off now. There’s still plenty of racing left and I’ll keep working hard and doing what I do.

We’ve had two rounds with back-to-back moto formats now. What are your thoughts on them?

Look, obviously I’d much prefer to have one race where you can get into a rhythm, use a bit of strategy and get the race over and done with, but I appreciate that for the fans and for TV, it’s exciting to have two gate-drops, a higher intensity and closer finishes. I’ve focused on practicing sprints and I’m getting good starts, so whatever the format is, I’ll work towards it. I’ve shown I can win both race formats, so whatever you throw at me, I’m ready. It’s the same with concrete starts like we had at Maitland – you have to adapt to these different aspects of racing.

There was so much uncertainty about whether Maitland would even go ahead. Even though you didn’t have to travel interstate, you do live in Sydney, which no doubt was a bit of a worry.

For sure. There was a bit of stuff happening in Sydney and it wasn’t looking that promising that we’d be able to go racing, but I take my hat off to MA and the ProMX crew for putting in a lot of work to keep the series rolling and keeping everyone safe at the same time. With the world we’re living in at the moment, there’s no certainty until we’re on the track. I just kept training through the week and made sure I stayed ready to go racing. It was a close thing, but I’m glad we got it in the books and the vast majority of riders were able to be there.

We’ve got four weeks until the next scheduled round at Wodonga. What are you going to work on?

I don’t plan to deviate too much from what I’ve been doing. I’ll keep doing motos, working at the gym and training off the bike. I’ve got a good training programme with Dylan Wills, which has been fun for both of us. Willsy had a great day at Maitland in the MX2 class, so our arrangement is benefiting him as well. We keep what we do pretty quiet and that’s the way I like it. Congrats on another round win and extending your points lead. How are you feeling?

Thank you. It was definitely a good day for me. I got in a good qualifying lap and I was happy with that first moto where I got a good start, then passed Jay Wilson for the lead and win. Throwing it away in the second moto made it hard for myself and I ate a fair bit of roost trying to get back through the pack. Still, I was happy to extend my points lead. It’s early in the season and I’m taking it race by race. I’m not stressed on the points, but I was more angry at myself for making that mistake in the second race.

So what happened in that second moto, as no-one really saw your crash?

On the first lap I came into a rut and tipped it in a bit early, and caught the bank on the inside. I gave it a handful of throttle and it ripped me off the back of the thing. It wasn’t bad – it was more annoying than anything – but when you crash on the opening lap you lose so many positions so quickly.

Still, you can’t be disappointed with your ability to make passes on that track, and it was probably good to prove to everyone that you’re not just capable of controlling the race from the start.

Exactly. Maitland wasn’t an easy track to pass on; there were options out there, but there was kind of only one main line, and you really had to try and find those opportunities to make passes stick. It was really good to be in that position and race differently, to not freak out, and to move through the pack without doing anything too crazy. So far this year I’ve had to ride with a more defensive mindset at the front. In that second moto I was riding full-on to get as far through the pack as possible. While I still won the Overall, it’s a shame the races aren’t longer as I felt I was getting faster as time wore on.

What did you think of the track prep and the concrete start?

Yeah, that was the first concrete start in a while and I didn’t mind it, to be honest. I got a really good start in the first moto, but in the second I got boxed by two Yamahas and that set me back a bit. The track prep wasn’t bad. Obviously Maitland is a hard-pack track, but I heard their machine broke down before the track prep could be completely finished, so there were some big clods of dirt out there. You couldn’t really explore too much off-line as it was like riding on pebbles, but for how hard-pack the track is, they did a good job and it developed a lot of lines and ruts.

Sunday had a bit of a different vibe with the whole Covid-19 threat as well. How was the atmosphere at the track compared to, say, Canberra?

It was definitely different. Everyone was nervous about what would happen and how they were going to get home. It was disappointing that we weren’t able to talk to people and hang out as we usually do, and that the pits were closed off to the public. I’m stoked they didn’t cancel the whole event, as we were pretty worried about that on Saturday. Getting home to Melbourne afterward wasn’t too bad; I just had to have a Covid test this morning and have to isolate at home until I get the results back, probably tomorrow (Tuesday). Once I get the all-clear we’ll be back into it.