Two weeks ago, Team HRC announced that Mitch Evans would miss the opening round of MXGP in Russia due to complications with a wrist injury he sustained at the Spanish GP last year. Then earlier this week, Honda announced he was going to have further surgery, effectively torpedoing his 2021 championship prospects. MotoOnline spoke with Evans this week as he left hotel quarantine to get the details in Conversation. 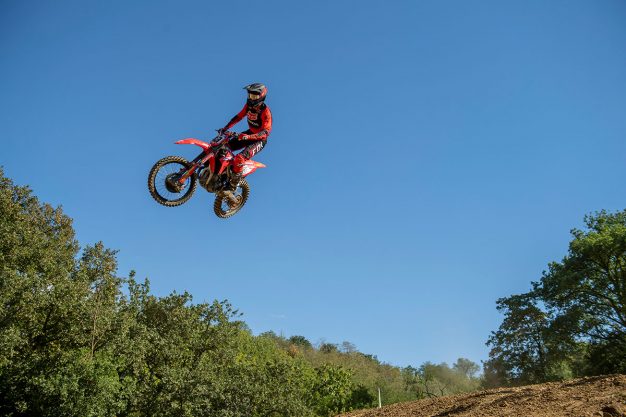 Mitch, where are you at the moment?

I just got out of quarantine in Brisbane yesterday. I’ll stay here until I get wrist surgery with Dr Steven Andrews, then go home to Cairns. Dr Andrews has looked after my brother and Jackson Richardson, and looked after my shoulder and second wrist surgery in December last year, so we trust him and he’s always been good to us.

So you’ve already had a second surgery on your wrist?

Yeah, they didn’t do a very good job with the first surgery in October, they didn’t fix my wrist in the right position and they added an unnecessarily big plate and screws in there. Because they didn’t fix the joint surface well enough, the bones in my hand had nothing to sit on. The second surgery in December definitely helped and at least the bones are straighter now, but the joint surface isn’t smooth and that’s giving me pain. We had to give it time to see if it’d get better, as the doctor said sometimes it can build up scar tissue that acts as cartilage. It started to get better, but then the improvements kind of plateaued, and if anything, started to get worse again.

What will this upcoming surgery involve?

I’m getting a radioscapholunate fusion. They take the scaphoid and lunate from my hand and fix it to my radius to get rid of the rough joint surface that’s giving me all the pain. My joint will then be further up in my hand, which is still in good shape. I’ll only have 50 per cent movement of a normal wrist, but at least there’s an 85-90 per cent chance I’ll be pain-free. I’ve spoken with Christian Craig, who’s had a partial fusion, and he said because it’s pain-free he doesn’t even notice the restricted movement. At the moment I don’t even have the movement, but I still have the pain, so it’s the worst of both worlds. If the partial fusion doesn’t work and I still have pain, the only option left is full fusion to lock my wrist in place.

Let’s hope it doesn’t come to that. And just to clarify, we’re talking about your left wrist here, not your throttle hand.

Yeah that’s right. The movement or issue that I’ve struggled with the most was actually turning right. We call it the doorknob grip, where, when you turn the bike, you need to turn your hand to get your outside elbow up. I couldn’t do that very well.

So when did you start getting an inkling that you wouldn’t be ready for the start of the championship?

About six weeks ago. I started seeing other surgeons, including one in Italy near Venice, and he suggested a small surgery to clean up the joint surface, then get a bit of body fat and inject it in there to act as cartilage. I got a second opinion from my doctor here in Australia and he said there was a one per cent chance that it would work. While I would’ve only been off the bike for a month, it was going to cost 20,000 Euros with very slim odds of success. It was basically going to be a Band-Aid measure to get through the season, undergo further surgery, then still be underprepared for next year. When we weighed all the options up, we made the call to sacrifice this year and be 100 per cent ready for next year. You’ve alluded to the fact that you’re taking the whole year off, but what sort of timeframe are we looking at before you’re back riding?

The surgery is scheduled to happen in mid-July and will be quite a difficult surgery, so I’ll stay in Brisbane until it’s done, then head back home to Cairns afterward. The recovery time is three to six months, but I was told six months for my shoulder and I was back on the bike after three and a half. We’ll have to wait and see how the surgery and recovery goes and make a decision as to whether there’re any races left. My goal is still to do at least a couple of GPs this year. It’ll be difficult, because by the time I’m back riding, it’ll have basically been 12 months off the bike. I was riding for two months after my second surgery, but it wasn’t really riding – it was just surviving.

With 2021 now written off, is there any pressure on your seat at Team HRC at all?

I have a two-year contract until the end of next year, thankfully, so I’m all good in that department and don’t have to stress or worry about that. Otherwise I probably would’ve tried to put that Band-Aid measure in place and battled through this year the best I could.

That’s got to be a big weight off the shoulders, knowing that you have that locked in, and it’s in the team’s best interests for you to be in the best possible condition for 2022.

Exactly. They could see how much I was struggling with riding and they said ‘look, take as much time as you need to get back to 100 per cent‘. They were involved in all the doctor’s appointments and what-not, so they understood everything, and they know that when I’m fit and healthy I’m a top five guy. They’ve been really understanding with it and we’re able to move forward as a team.

Was it frustrating watching the MXGP opener at Russia from your hotel quarantine, especially with your team-mate, Tim Gajser, taking the win?

Definitely. I didn’t know whether I should watch the racing or not! Tim did an unreal job to come from almost dead last back to first. He was on another level and he’s been doing a lot of work. I did a bit of riding with him and I wasn’t surprised at all with his performance. When we’re testing it’s been awesome being able to use him as a gauge of where I’m at. He’s a four-time world champion, so he’s a great benchmark for me.