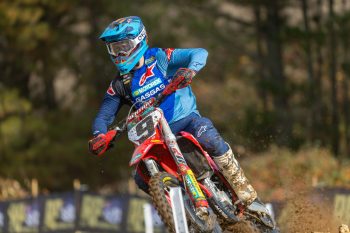 The GasGas Racing Team rider missed the opening round of the series with a fractured wrist and only returned to riding 10 days prior to Canberra, however the postponement of Gillman last month opened up a two-month gap between rounds that has ultimately allowed him to return to full strength.

Tanti’s potential was on display just two weeks ago at the Manjimup 15,000 in Western Australia, where he earned third overall amongst the majority of the ProMX title contenders, prompting him to elevate his goals for Maitland on Sunday.

“My body has healed up pretty good now, so I’ve been able to do everything and get more comfortable to where I was before the injury,” Tanti explained to MotoOnline.com.au.

“I’ve been building my fitness back up, and obviously at Manjimup, I’ve been performing a lot better than where I was at Canberra – there I was only 10 days back on the bike, so it’s just been getting better and better.

“The next goal is probably the top five mark at the moment – so nothing too crazy. For Canberra, it was just trying to get into the top 10 and get some points, but yeah, it’s definitely moved towards the top five and then progress to a podium in a few rounds’ time – or this weekend if it comes to that. but, it’s definitely a top-five goal for me.”

Tanti sits 14th in the MX1 championship standings with only one round under his belt.