Breaking down storylines to follow ahead of this weekend's MXGP of Russia.

This weekend marks the delayed start to the 2021 world championship, as the MXGP series jumps out of the gate in Russia. The Orlyonok circuit on the edge of the Black Sea will host the first of a tentative 19-round season and in Countdown, we highlight some of the key factors to keep an eye on over the opening rounds. 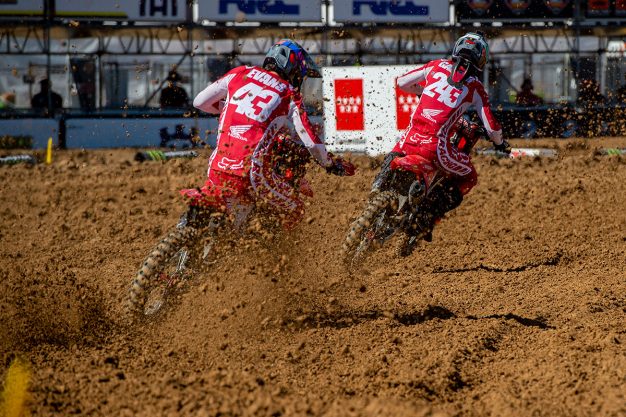 7. MX2 rerun:
Last year’s MX2 championship was a fascinating affair, with no less than eight competitors chalking up at least one race win in the disrupted championship. Things look ripe for a similar scenario in 2021, with most of the heavy-hitters remaining for another shot at the MX2 crown. Defending champion Tom Vialle (Red Bull KTM), runner-up Jago Geerts (Monster Energy Yamaha), Australian Jed Beaton (Rockstar Energy Husqvarna) and young Frenchman Maxime Renaux (Monster Energy Yamaha) will again go toe-to-toe and all eyes will be watching to see who’s improved the most over the lengthy off-season.

6. Australian focus:
Unlike last year where Australians had five racers to cheer for across the two premier classes, 2021 will see just two line up at the MXGP opener this weekend and both will appear in the MX2 class. After finishing fourth overall last year – including a race win at Mantova and three round podiums – Jed Beaton is one of the pre-season championship favourites. Now entering his fifth year on the circuit, Beaton will accept nothing less than race wins and regular podium results. Meanwhile, Wilson Todd rejoins Bike IT MTX Kawasaki for the second season of his two-year deal. Todd missed the vast majority of last year’s championship recovering from a torn ACL, but has shown good form in 2021 pre-season races so far. He’s finished second overall at rounds one and three of the British Motocross Championship – the weekend’s Canadian Heights result was made more impressive after an early return from arm-pump surgery. Meanwhile, it was announced earlier this week Team HRC’s Mitch Evans will miss the Orlyonok opener as he continues to recover from breaking his wrist at the Spanish Grand Prix eight months ago. There’s no word whether he’ll be back for the British MXGP at Matterley Basin in three weeks time.

5. The 2021 graduates:
Two notable MX2 racers are stepping up to the big league in 2021, with Ben Watson (Monster Energy Yamaha) and Thomas Kjer Olsen (Rockstar Energy Husqvarna) graduating to the MXGP class. The duo finished fifth and sixth respectively in the MX2 championship last year and will remain with their teams as they jump to the premier field. Both racers have enjoyed success in the MX2 class, as Olsen finished the championship runner-up in 2019 and they shared five race wins between them last year. In pre-season racing, Watson has been in fine form, finishing equal on points with Dutch legend Jeffrey Herlings at the Lyng round of the British championships two and a half weeks ago. Olsen’s pre-season results have been more mixed, although he did win the second round of the Italian championship at Alghero in March, beating the likes of Romain Febvre and Glenn Caldenhoff in the process. Can the rookies cause an upset this weekend?

4. Return of Arminas Jasikonis:
He’s not quite ready to line-up this weekend at the Russian GP, but the imminent return of Lithuanian rider Arminas Jasikonis is one of the big storylines to follow this year. Eight months ago the Rockstar Energy Husqvarna racer had a life-threatening crash at the Grand Prix of Lombardia and was placed in a medically-induced coma with a traumatic brain injury. It’s been a long grind to fight his way back to full health, but the fact Jasikonis is riding at all is a miracle. At this stage he’s looking to stage his welcome return to the MXGP paddock at either Matterley Basin (round two) or Maggiora (round three). 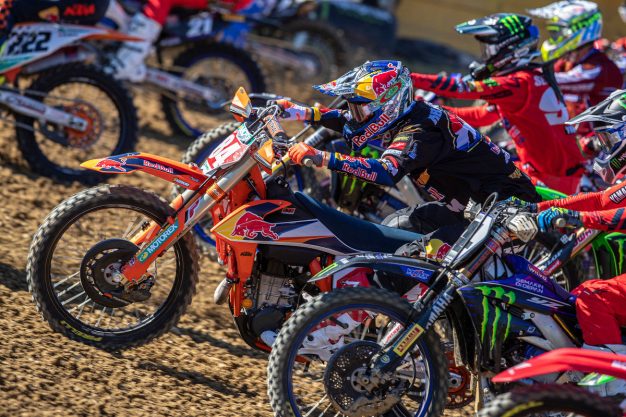 3. The depth of the MX1 field:
It seems every year the talent of the MXGP field runs further into the pack, and even though 2021 signals the retirement of long-time championship contenders Gautier Paulin and Clement Desalle, the premier class is as loaded as ever. While Jeffrey Herlings will enter as the favourite (again), his Red Bull KTM team-mates Jorge Prado and Antonio Carioli will do their best to keep him honest. You can never discount two-time defending champion Tim Gajser (Team HRC) or former champion Romain Febvre (Monster Energy Kawasaki), while Monster Energy Yamaha’s stables have been boosted by Glenn Coldenhoff, who joins Jeremy Seewer in the bLU cRU for 2021. Once Queensland’s Mitch Evans returns to the race-track, you can throw his hat in the ring for podiums and possibly wins, too.

2. Herlings coming back:
It’s a scary prospect that Red Bull KTM’s Jeffrey Herlings is fit, healthy and fast entering 2021. After back-to-back seasons plagued by injury, The Bullet has looking to return with a vengeance and take back the world championship crown that his rival Tim Gajser has clutched for two years. Herlings has won all three pre-season races he’s contested, including the opening round of the French Elite Championship at Ernee on the weekend. To be fair, of those three wins he’s chalked up, Ben Watson and Jeremy Seewer have held him to countback victories twice. However, we expect to see Herlings step up to another level on the season begins, even though he’s publicly said he’s going to play the long game in 2021, as he endeavours to get through the season injury-free.

1. Future of Cairoli:
This year marks Antonio Cairoli’s 14th year in the MXGP class as he rolls up his sleeves to chase his 10th world title. His hugely-successful career has cemented him as one of the greatest MXGP racers of the modern era, but every professional sportsperson has to call time on their career eventually. The 35-year-old Red Bull KTM racer underwent minor knee surgery late last year and stepped back into the saddle in February. For this year’s MXGP championship, he’s said his goal is to be competitive, but has acknowledged that his level of performance isn’t likely to go up. If his pace and form don’t meet his lofty goals this year, 2021 could well mark the last time we see the Italian legend lining up behind the starting gate for a full season.