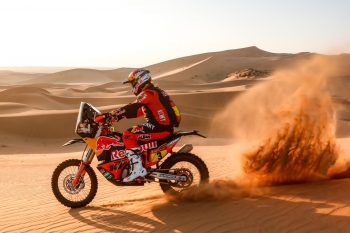 Two-time Dakar Rally winner Toby Price has extended his contract with Red Bull KTM Factory Racing, which will see him through the 2023 season.

Price joined the factory KTM squad for the 2016 season after a podium on debut in the 2015 Dakar Rally, delivering the Austrian manufacturer two Dakar victories and podiums since, along with an FIM Cross-Country Rallies World Championship.

The Australian has been sidelined from riding after injuring his shoulder at this year’s Dakar, and intends to return to action in the rally world championship later this year.

“Hopefully, I can repay the confidence they have in me by taking another few wins. There really is no other team like Red Bull KTM, they really take good care of us and I really look forward to getting away to the events.

“The whole team and crew have been a huge part of my racing for the past four or five years, so I’m really happy to still be a part of it, and we’re developing the new bike too, which is going well. My injury seems to be healing well. There were definitely some unwanted complications at first, but now after three surgeries, I’m in a much better place.

“I’d say I’m around 60-70 percent fit, so not far away from being ready to go. I’m definitely looking forward to getting back on two wheels and racing my bike again. The plan is to get back on the bike as soon as it’s safe to do so and build things up before heading back overseas to do some racing again.”

The fan-favourite, who is a six-time winner of the Finke Desert Race in the Bike category, is set to take on the notorious event in a trophy truck this weekend.