Solution ‘close’ for Pro Motocross to be broadcast in Australia 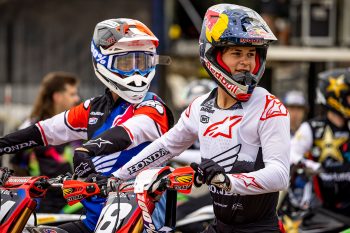 A solution to have Lucas Oil Pro Motocross broadcast in Australia is now ‘close’ and could be reached as soon as round three of the 2021 season at High Point, MX Sports Pro Racing has revealed to MotoOnline.

Australians have been left to search for inconsistent workarounds in a bid to watch the American championship in recent years, much to the frustration of fans eager to follow the sport closely.

MX Sports Pro Racing president Davey Coombs has confirmed that the series organisers are pressing broadcast rights-holders NBCUniversal to source an arrangement that will have Pro Motocross aired locally. The rise of 250MX red plate-holder Jett and elder brother Hunter Lawrence has added urgency in finding a fix.

Outside of being broadcast across Peacock and the NBC network in the United States, Monster Energy Supercross has a specific international streaming platform that is accessible for Australians to subscribe to, however, MX Sports’ agreement with NBC for the outdoors doesn’t permit that type of direct service to be launched by the promoter.

“I assure you that I am beating on NBC’s door every day about this and have been all year,” explained Coombs when contacted by MotoOnline.com.au this week. “Both SX and MX are on the same network (NBC), but Supercross has their own international streaming deal, so they don’t use NBC Sports Gold.

“We tried to do a deal with them to circumvent the problem with Australia, but at the last minute we were told that the network ‘is working on something’. It didn’t happen for the first race, other than their placing of an extended highlights package on YouTube, which still doesn’t cut it for fans in Australia, I’m sure.

“But this is a complicated thing involving the old Sky network, on the one hand, Fox and ESPN dividing the remnants of that, and NBC trying to find a new partner down under. Yesterday one of the network’s international agents explained further to me that they were very close to getting a deal with a new Australian entity for both linear TV and streaming.

“The rising popularity of Hunter and Jett Lawrence was helping drive it, as they have been hearing from fans all over, and I call every other day! They are very hopeful that something can be sorted before round three, which is on June 19 and gives them more time to work it all out.

“Like I said, it’s complicated network stuff that NBC needs to sort for us, as they have the broadcast rights and they do the distribution as well – I know they are trying very hard. I told Lucas Mirtl (Hunter and Jett’s agent) that they would be the first to know, as they have been adamant about their fans back home as well.

“They are also willing to cut commercial promos or anything, really, to promote the coverage. Jett even said he was going to mention it on the podium last weekend if he got up there that these races need to be shown in Australia! I don’t think he did on the actual podium, but he did mention it to a few race reporters, including me.

“I am as frustrated as anyone, because we told the network that those two were stars in the making and we would get pummelled if they didn’t sort something out with Australia and New Zealand, then Jett goes out and wins the opener and I called them and asked how many emails and complaints had they received after that?

“They now get the message from Australia and other parts of the world, still left in the dark. And even here in the States, they are now seeing what an ascendant star Jett is after the opener and realise we all need to figure something out, just as we did with France and then they had a guy win last week in Dylan Ferrandis.

“I should add, in the network’s defence, that they are all hands on deck with the upcoming (and long-delayed) 2020 Summer Olympics in Japan. They are the broadcast partner for the entire world and I know it’s been a priority for everyone for the past couple of years.

“The landscape of television is evolving so fast and in the middle of this pandemic to boot, that it’s made it hard for them to get things nailed down as quickly as we all hoped. Also, with them transitioning from NBC Sports to Peacock, they’ve been extremely busy.”

It remains unclear what new streaming platform Pro Motocross could land on in Australia, the most high-profile option currently being Kayo Sports under the ownership of Foxtel. Such an arrangement could also see the series return to Fox Sports or ESPN, as it has in the past, although an agreement couldn’t be reached back in 2019.

An alternative could potentially be the recently-launched Stan Sport. Owned by Nine Entertainment Co., it was announced last August that Stan had secured a multi-year agreement with NBCUniversal that would include exclusive content made available from Peacock in the US. Such an addition of Pro Motocross could offer a significant boost in attracting a younger demographic that the Lawrences appeal to.