Q&A: What we learned at the Pro Motocross opener

Dissecting results from the opening round of season 2021 at Fox Raceway.

The 2021 Lucas Oil Pro Motocross Championship got off to a storming start over the weekend with an action-packed round of racing at Fox Raceway. While plenty of questions were answered, it’s fair to say there were also a lot more that were raised. In this edition of Q&A, MotoOnline gets to the bottom of both. A: Absolutely. Team Honda HRC’s talented Australian picked up exactly where he left off at Salt Lake City to claim the 250 overall at Fox Raceway. Lawrence was the fastest qualifier, but suffered an average start in the opening 250 race; he was as low as 19th on the first lap, but charged his way past 10 guys in one lap alone. He worked his way up to second place behind Jeremy Martin before time ran out. Lawrence then came out with all guns blazing in the second race, picking off Max Vohland (Red Bull KTM Factory Racing) on the third lap, then hurtling past Monster Energy Star Racing Yamaha duo Jeremy Martin and Justin Cooper at the halfway mark to take the lead. From there he was never challenged as he won by a comfortable six seconds over Martin.

Q: Can Cooper Webb claim the championship double in 2021?

A: Just to make it clear, claiming the SX-MX double is a massive ask and hasn’t been achieved since Ryan Dungey in 2015. This year racers had a longer four-week break to transition from supercross to motocross mode, but even still, Red Bull KTM Factory Racing’s 2021 Supercross champion Cooper Webb was a little off the pace, despite leading the opening 450 race for a lap. In that first moto he started strong behind Adam Cianciarulo (Monster Energy Kawasaki) and inherited the lead when the fast Floridian crashed on a downhill. Webb’s advantage was short-lived, though, as Monster Energy Star Racing Yamaha’s Dylan Ferrandis tore past two laps later. Webb faded late in the race to finish fifth. In the second race Webb started sixth, but slowly dropped down the order throughout the race to finish 11th and eighth overall. There’s still a long way to go in the Pro Motocross Championship and you can never discount Webb, who tends to work his way into title contention as a series progresses.

Q: What happened to Eli Tomac and Zach Osborne?

A: Former champion Eli Tomac (Monster Energy Kawasaki) and defending number one plate-holder Zach Osborne (Rockstar Energy Husqvarna Factory Racing) were among the surprise packages who failed to fire too many shots at Fox Raceway. Tomac qualified 11th and Osborne 12th, and that essentially set the tone for both riders for the remainder of the day. In the opening moto Osborne was ninth through the first turn, but gradually dropped through the order to finish 13th. His second moto was a big improvement as he fought to fifth place and 10th overall, relinquishing fourth place to Jason Anderson in the dying laps after a race-long battle. Meanwhile, Tomac finished the opening race in ninth and the second moto in eighth on his way to ninth overall. Expect him to turn things around this weekend at his home round at Thunder Valley, CO. 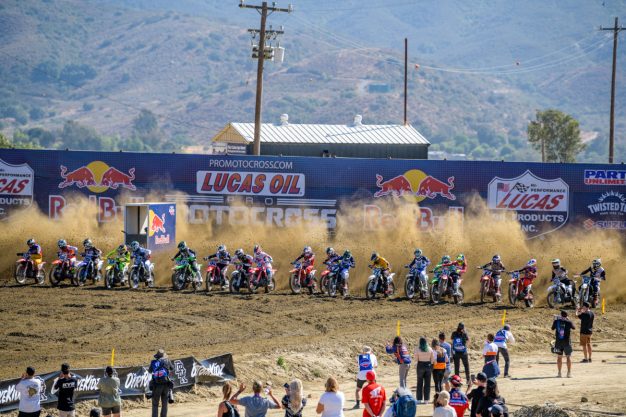 Q: Who impressed the most at the opening round?

A: All three podium placers in the 450 class had standout performances in our books. On his first 450 outdoors ride, Dylan Ferrandis looked super strong all day, but especially in the opening race where he held off a fast-finishing Chase Sexton (Team Honda HRC) for the win by a meager 0.1 seconds. To then back it up with a solid third in the second race – taking his first 450 overall in the process – proves that he could be a real threat this year. The Frenchman’s Monster Energy Star Racing Yamaha team-mate, Aaron Plessinger, also turned a lot of heads throughout the day, especially his second moto, where he kept Team Honda HRC’s Ken Roczen honest for most of the race, finishing a career-best second place and third overall on the day. Speaking of Roczen, considering he’d downplayed his expectations coming in, he impressed many. After ‘shaking off the rust’ with a sixth in the opening race, Roczen led from wire-to-wire in the second 450 moto, finishing with a healthy 11-second buffer over Plessinger. Meanwhile, in the 250 class, you can’t look past Red Bull KTM youngster Max Vohland, who had an impressive debut at Pala. The son of former factory racer Tallon Vohland led half of the opening 250 race before getting passed by eventual race-winner Jeremy Martin. Two laps later his bike let go and he was forced to retire. In the second moto Vohland again scored a great start in third place, but a small mistake at the midway mark saw him drop to 12th. He regrouped and picked off key riders on his way to seventh.

Q: With Jett taking all the limelight, how did Hunter Lawrence go?

A: Team Honda HRC’s Hunter Lawrence had a self-admitted ‘rough weekend’ despite finishing sixth overall for the day. In the opening 250 moto he struggled with rear traction on the technical track and crashed twice in both outings. Still, he qualified fourth fastest and clocked up a respectable 6-5 result to open his 2021 Pro Motocross account, so despite the day’s trials, there were plenty of positives for him as the championship heads to Thunder Valley this weekend.

Q: How much can we read into the results from Fox Raceway?

A: Opening rounds of any motocross or supercross championship are notorious for throwing up wild, unexpected results, and Pala was no exception. The 450 podium was made up of two racers who’d never appeared on a 450 motocross dais before, and one rider who didn’t race outdoors in 2020. If anything, it proves just how deep talent in the premier class runs this year, and sets up a fascinating season that’ll hopefully go down to the wire.