Confirmation that Craig will remain in 250SX and 450MX for a second term. 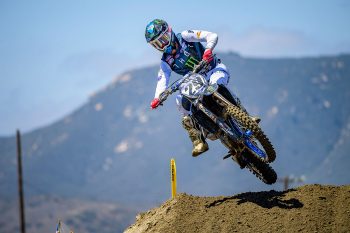 Monster Energy Star Racing Yamaha has subtly announced the re-signing of Christian Craig for the 2022 season, set to continue splitting his time between 250SX and 450MX next year.

The 29-year-old was confirmed to be staying at Star Racing for a second term via a social media post leading into the weekend’s Lucas Oil Pro Motocross opener at Fox Raceway.

Craig was in the mix for this year’s Monster Energy Supercross 250SX East crown prior to breaking his leg at Salt Lake City 1, eventually claiming fourth after taking two wins across the series.

Outdoors, Craig has transitioned to the premier class aboard the factory-backed YZ450F and delivered 11-9 finishes for 12th overall at Pala on Saturday. It’s a platform that he intends to build upon as the season progresses.

“It was a decent day at Pala for the first round,” he recalled. “I struggled with the bike set-up in the first moto, but I was able to rebound with a solid second moto. I expect a lot more out of myself, so I’m just going to keep pushing!”

It’s expected that Eli Tomac will be moving to Monster Energy Star Racing Yamaha for Supercross and Pro Motocross in 2022, already confirmed to be departing Monster Energy Kawasaki at the close of this current season.