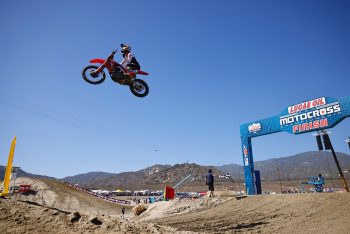 In the first round of the 2021 Lucas Oil Pro Motocross championship, Jett Lawrence fought for the win in the second moto to take the overall win and the points lead in the 250MX class.

It was all about perseverance for Lawrence in the opening round of the championship, as he worked his way to a 2-1 finish to take the win at Fox Raceway.

When the gate dropped on the first moto he found himself buried in the pack in 18th place, as rookie Max Vohland (Red Bull KTM) launched out of the gate to take the holeshot and a solid lead.

Vohland maintained a solid gap ahead of Stilez Robertson (Rockstar Energy Husqvarna) and Jeremy Martin (Monster Energy Star Racing Yamaha), until his bike began to smoke and he would eventually DNF with a mechanical.

At that point, Martin had taken the lead and set sail to take the moto win in his return from injury, with Lawrence and RJ Hampshire (Rockstar Energy Husqvarna) taking the final spots on the podium.

Cooper grabbed the holeshot in the second moto ahead of Martin, Vohland, Jett Lawrence, and Mosiman. Hunter Lawrence, Robertson, Hampshire, Swoll, and Forkner rounded out the top 10.

Lawrence found his way around Vohland and to the back of the Star Racing Yamaha teammates at the halfway point, making short work of the duo to take the lead, maintaining the gap seemingly with ease to take the win.

Martin worked his way around Cooper, but was unable to close the gap to Lawrence, settling for second place in the moto and the overall, with Cooper taking third and third overall on the day.

Mosiman’s pair of fourth places gave him fourth place on the day in an impressive showing at the opening round, while RJ Hampshire’s 3-9 score put him fifth after a battle with him and Vohland that saw the duo hit the ground in the second moto.

Sixth on the day went to Hunter Lawrence with a 6-5 score on the day, ahead of Garrett Marchbanks (ClubMX Yamaha) who tallied an 8-6 result on the day.

Forkner had a consistent day getting back to action after missing Supercross due to injury, taking 7-8 finishes on the day for eighth overall. Reigning 250SX East champion Colt Nichols salvaged ninth overall with 9-12 finishes. The final spot in the top 10 went to Jo Shimoda (Monster Energy Pro Circuit Kawasaki) with 14-11 finishes on the day.

The series now moves on to Thunder Valley in Colorado, with round two of the season set to take place next Saturday, 5 June. Dylan Ferrandis (Monster Energy Star Racing Yamaha) came out swinging in his 450MX debut at Fox Raceway, winning his first moto and sealing the overall with a third-place finish.

After an up and down rookie season of Monster Energy Supercross, Ferrandis didn’t hold back when the gate dropped on his first start in the premier class of Pro Motocross.

At the start of the opening race, it looked to be all Adam Cianciarulo (Monster Energy Kawasaki) with the speed to win as he jumped out to the lead after qualifying fastest in the morning sessions.

Cianciarulo then lost traction coming into a downhill section, hitting the ground and dropping to fourth allowing Webb to take the lead momentarily. He was passed and gapped pretty quickly by Ferrandis who never looked back going on to take the win.

Sexton took second by just 0.099s as he put in a late-race charge nearly passing Ferrandis at the line. Justin Barcia rounded out the podium after a hard-fought battle through the pack aboard his TLD Red Bull GasGas MC450.

As the gate dropped on the second moto Plessinger grabbed the final holeshot of the day ahead of Roczen, Cianciarulo, Webb, and Musquin.

Roczen rocketed around the outside of Plessinger for the lead in the opening lap as Cianciarulo bobbled and dropped off the back of the duo. With a much better start, Osborne worked his way into fourth in the second lap with Barcia just behind him.

After a not-so-great start, Ferrandis worked his way around Webb into sixth as he charged toward the front. With 18-minutes to go, Ferrandis made a move to get around Osborne, a crucial move for the overall results.

Roczen managed the gap at the front despite pressure from Plessinger throughout the race, eventually winning the moto by nearly 12 seconds. Ferrandis brought it home in third place to take the overall, leaving Roczen to finish second overall and Plessinger in third.

Barcia’s 3-6 moto scores gave him fourth place overall in his outdoor debut on the GasGas, while Sexton’s salvaged 2-10 on the day for fifth after a first turn crash left him in dead last off the start.

Jason Anderson’s 10-4 moto scores left him in sixth on the day after an impressive run in the second moto, followed by Marvin Musquin’s 8-7 tally in eighth place.

The final two spots inside the top 10 went to the 9-8 score of Eli Tomac (Monster Energy Kawasaki) and defending champion Zach Osborne who after a sluggish first moto took home 13-5 scores.

The series now heads to Colorado for the second round at Thunder Valley Raceway next Saturday, 5 June, where Ferrandis will look to keep the red-plate. 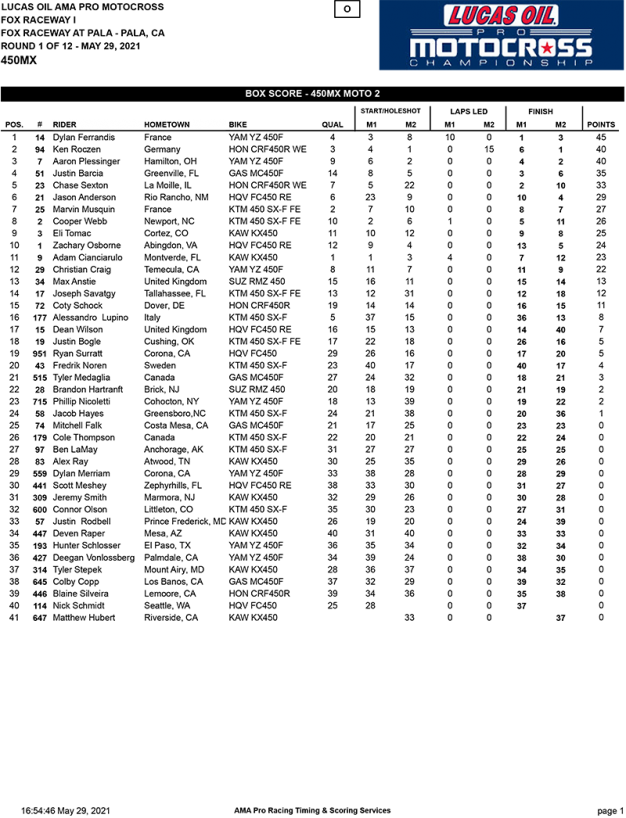