The young Australian is keeping the pressure off for round one. 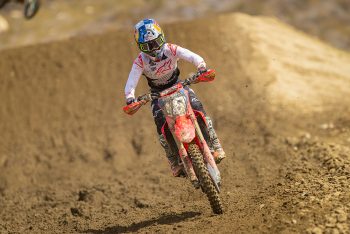 Entering his second year in the 250MX class, Jett Lawrence is keeping an open mind in his approach to the 2021 Pro Motocross championship as he shifts gears from the rookie learning experience to contending for his first championship.

With the season set to get underway this weekend at Fox Raceway in Southern California, Lawrence is preparing to have his second go at the outdoor nationals.

While he seems eager to get going, he’s quite relaxed in his approach to the upcoming season.

“If not, I’ll just take whatever I can that day and just make sure that I’m there for the rest of the season and make sure I give the boys a hard time and make sure whoever the champion is, they don’t get it easy.”

With a race win under his belt in both Supercross and Motocross, the young Australian is beginning to come into the spotlight as a challenge for the title, but as he narrows his sights on the potential fight for the championship, he’s keeping the pressure off.

“I think if you think about the championship too much that’s what can wreck you. I think it’s what you said, take it race by race and I think [Christian] Craig said this in one of these things, be present, be in the moment and each race just take it race by race.”

The 12-round, 24-moto season kicks off this weekend, 29 May, at Fox Raceway in Pala, California for round one.