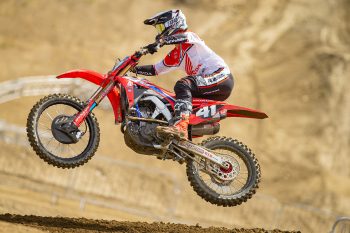 Lawrence struggled with a shoulder injury through much of last season and ended the year with it dislocating again at the Pala finals before undergoing surgery in the off-season.

Since then, however, Lawrence has been a standout in 2021, claiming runner-up in the 250SX West region of Monster Energy Supercross and winning the Arlington 2 main event. As a result, he’s expecting he can return to the form he enjoyed as a rookie outdoors two years ago.

“100 percent, most definitely,” Lawrence stated when questioned if he can return to his race-winning results of 2019. “I feel like I’m the most healthy body-wise, physically strong and mentally ready, so I’m excited to get underway. Obviously the Supercross season was really good and we’ve made a lot of progress, my body’s doing really well and shoulder’s good.”

“I felt like coming out of Supercross I was extremely fit and strong, so got into some long outdoor motos, get your body used to that longer duration and that’s all there is to it. I mean, whether you’re coming in ready or not, outdoors is always a grind and it’s tough, so it’s just who can suffer the best. I feel like I’m ready for that.”

While his current confidence will be beneficial, Lawrence isn’t counting on his results in Supercross to provide a major boost in 250MX, instead relying upon the fact that he knows his health is where it needs to be leading into the new season. He says momentum from in the stadiums only helps certain people, who rely upon confidence in order to arrive at their peak.

“It [helps] if you’re someone who really relies on confidence to do well, which I don’t think I am, because I can suck at qualifying, but deep down I know I’m a racer and I don’t think it makes or breaks me,” he added. “Obviously, it helps, just having a good season, knowing how strong and that the majority of my passes were made in the last five minutes just proves that I’m race-ready, fit and strong.”