Series leader taking each race as it comes in pursuit of maiden MX2 title. 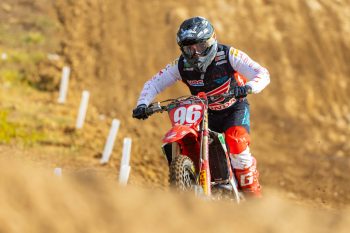 MX2 points leader Kyle Webster insists continuing his undefeated winning streak isn’t the goal ahead of Gillman’s third round of the 2021 Penrite ProMX Championship, the Honda Racing entry carrying a 31-point advantage heading into the weekend.

Webster has been unstoppable across the first two rounds of the series in very different conditions, collecting four moto wins from four starts to cement himself as the clear favourite for the MX2 crown.

The 25-year-old is primed for yet another strong showing this weekend at Gillman, which is a venue he frequented in his time as a privateer travelling back and forth to Western Australia.

“It’s definitely been a good start so far, but I’m not thinking about the undefeated thing too much,” Webster explained to MotoOnline.com.au. “Every race you want to win, so it’s not really something I’m thinking about.

“It’s not a goal of mine to go undefeated – I just want to win every race I go in. It’s not something I’m trying to do – I’m just taking each race as it comes.”

Inconsistencies amongst Webster’s rivals has allowed him to leapfrog the competition just two rounds in, setting him up with a comfortable points buffer over second place’s Rhys Budd (Yamalube Yamaha Racing).