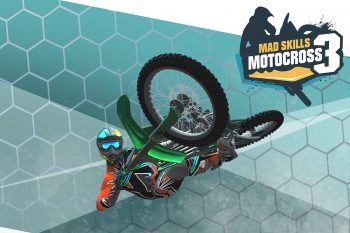 The highly-anticipated mobile game is next in a franchise that has seen more than 55 million installs on iOS and Android devices.

Motorcycle physics in the game were upgraded to be even more responsive and to include whips, dialled in with the help of a beta team composed mostly of actual motocross racers.

The Mad Skills Motocross franchise has risen to prominence partially because of its strong reputation in real-life motocross and action sports. Although in many ways it’s an arcade-style side-scrolling racing game, the game features elements of physics realism that strongly appeal to motocross racers and enthusiasts.

“If you’re looking for the best mobile motocross game there is, just get Mad Skills Motocross 3,” said newly-crowned 250SX West champion Justin Cooper, who is also one of the best Mad Skills Motocross 2 players in the world. Cooper qualified for the game’s world championship event in Stockholm in 2017, one of only 12 players in the world to do so.

The game’s 25 May release was announced with a trailer that some reviewers have referred to as the best video game trailer ever made. The trailer was produced by Denmark-based IMOV Studios.

“We can’t wait to gather feedback from our players and begin the journey of expanding the game with new ideas and content through the coming years.”

Download Mad Skills Motocross 3 for free now at this link.