Lead game designer reveals what to expect from this week's new release.

Eight years after Mad Skills Motocross 2 took the mobile gaming world by storm, the crew responsible at Turborilla are releasing a much-awaited third instalment. Mad Skills Motocross 3 has just been released (available for free download here) and MotoOnline caught up with lead game designer, Joe Welch, to find out what we can expect from a platform that’s already gained a cult-like status and following. 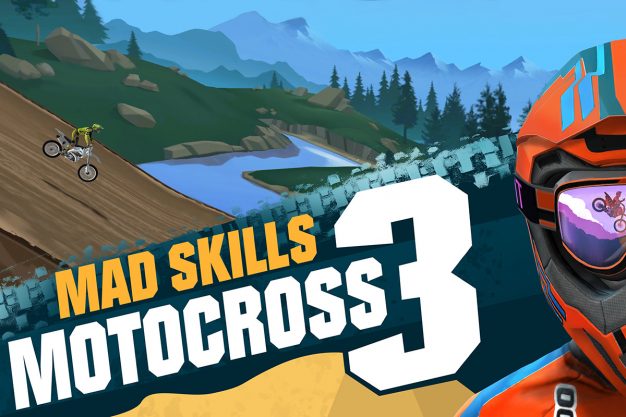 Joe, it’s been a long time since Mad Skills Motocross 2 was released. Why has there been such a big gap between games?

Really, we could’ve released the game one or two years ago, but there are a couple of reasons why we decided to hold off a bit longer. There were only two programmers working on it for the first year or so, as the rest of the team was working on Mad Skills BMX 2. We didn’t get full-time working on Mad Skills Motocross 3 until a few years ago. The other reason is we wanted to make sure we stood up to our reputation and the standard that people expect. We’ve gone from a 2D game to a 3D game, which required us to rebuild the physics that made Mad Skills 2 so good. It took a while to nail the physics and be happy with them. This was also the first time where we took our time with a soft launch. The game has been out in Canada and the Philippines for a while and we’ve been listening to feedback, refining and tweaking the game until we were 100% happy with it.

Just to step back a bit, how successful was Mad Skills 2, and how many people still play it now?

It was pretty big – the last I heard we’d registered more than 60 million downloads across iOS and Android. It’s been out for more than eight years now, but there’re still a lot of people playing it; we released a new mode for the game called Daily Dash about three months ago, and we still have about 100,000 daily users.

Those are impressive figures for a game that was released in 2013. What have you guys really focused on improving from Mad Skills 2 to Mad Skills 3?

The big thing that people will notice right off the bat is that the environment is in 3D, which might be a bit jarring for people who’re still regularly playing Mad Skills 2. The camera angle is a bit different and it feels a little more zoomed out. We wanted to bring a lot more customisation to the game and you can now customise your rider from head to toe, there are seven different parts you can change and upgrade on your bike, but to make that look kinda fun in the menus we had to go to 3D. The other big reason for 3D is that we wanted to incorporate whips, which people have been wanting forever. You can’t have whips in 2D as they just don’t look right. We also have multiple surface types, with dirt and sand, and we have plans to add mud in the future. There are a bunch of things coming post-launch, like teams, which people have been requesting for a long time. We’re still tweaking the design of that aspect, but you’ll be able to join a team of up to 30 people, chat with each other, take part in team tournaments and achieve ranks and prizes. It should be pretty fun.

Let’s talk whips. Everyone’s been screaming out for you guys to add them since the first game was released. How hard were they to implement and did the addition mess with the physics at all?

I think the hardest part was convincing members of the team to let us try it. For good reason, there was concern that it might mess with the physics that everyone loves. We didn’t want to add a new function that could be somehow used for some crazy advantage that takes away from the core of the game. Once we started on it, the physics came together reasonably quickly, but the animation took a while to perfect. We used video footage of whips and animated it accordingly, then sent it out to a bunch of riders to test to give us feedback, so we could make sure it felt realistic enough. We landed in a pretty cool spot with it – you can easily control the size and speed of the whip by how far, and how quickly, you swipe the screen, which is a lot of fun.

Are there plans to add any different styles of whips?

We’ve talked about it, for sure. We have an idea of incorporating a scrub feature, but the physics are taking a bit longer to get right. Eventually you’ll be able to whip early and scrub jumps. We’ve talked about different whip styles, and the possibility of selecting the type of whip you want in the menu and using that in the game.

Why do you think Mad Skills Motocross has been so successful over the years?

I think the physics have a big part to do with it. I’ve heard from a lot of riders that what they love is the feeling of getting the power to the ground and the bike’s acceleration. You can feel the little nuances with the bike you can’t feel with other mobile racing games. The game is easy to pick up and learn, but it’s tough to master. You always want to get better and can always improve and get faster, but it’s very likely you’re never going to be the best. That competitiveness makes it quite addictive and brings people back. We also try and update the game with new modes and hopefully that makes keeps people engaged and playing.

Tell us straight, is Mad Skills 3 the last version of the game that we can expect to be released?

We do have other games in the works, but it’s too soon to talk about them yet. Our philosophy going into this game was that ideally this would be the Mad Skills Motocross game on mobile for a long time. We want it to run for, like, 10 years with frequent updates, different features, a track editor, and kinda build upon the game and make it something special. We’re not the type of guys to pump out a new game every couple of years – we want Mad Skills Motocross 3 to be around for a long time.