Title contender misses out on points advantage after sanctions downgraded. 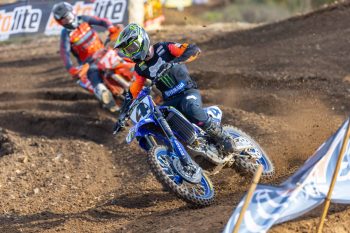 CDR Yamaha Monster Energy rider Luke Clout isn’t dwelling on the penalty saga that unfolded after Canberra’s second round of the 2021 Penrite ProMX Championship, despite being a major beneficiary had the initial sanctions been upheld.

It was revealed over a week after Canberra that championship leader Regan Duffy (KTM Racing Team) and three other riders were handed down penalties for jumping on a red-cross flag following a review of the broadcast package.

However those penalties, which would’ve knocked Duffy off the podium and allowed overall winner Clout to make up significant ground in the points, were later downgraded following a further investigation, which was largely based on the fact riders and teams were unaware they could be penalised post-event upon reviewing the TV broadcast.

Acknowledging the points haul would’ve been a boost for his championship campaign while disagreeing with the officials’ decision, Clout is looking to put it behind him as the series heads to Gillman this weekend for round three.

“At the end of the day, it is what it is and the officials made the call,” Clout said to MotoOnline.com.au. “Those extra points would’ve been nice, obviously, but it wasn’t to be. I don’t really want to go into it, but jumping on a red-cross flag is really the worst thing you can do, and no penalties were given.

“I don’t think the call was the right one – people have definitely been penalised for less. I’m just doing my own thing – I’m training and riding really well at the moment, so I’m just looking forward to getting behind the gate, going racing and doing my thing.”