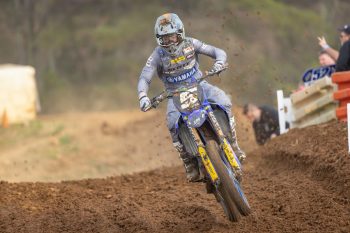 MX2 rookie Alex Larwood will line up for his home round of the 2021 Penrite ProMX Championship at Gillman this weekend after overcoming a dislocated shoulder sustained at Canberra’s second round.

The WBR Yamaha Race Team was hospitalised after coming together with Jay Wilson (Yamalube Yamaha Racing) at the ACT stop earlier this month, placing the youthful South Australian in doubt for his home event this Sunday.

Larwood tested his shoulder at the weekend after three weeks of extensive therapy, with the teenager declaring he feels fit to compete as he looks to make up championship points at a very familiar venue.

“I had my first ride on Saturday and everything went very well, so I’ll be competing at Gillman for sure,” Larwood told MotoOnline.com.au. “It felt fine – I’ve done lots of physio with my trainer Jon Park and we’ve got it back to 100 percent – it felt fine and we strapped it up.

“I’m pretty happy with how it’s all going, and Jon’s pretty happy with it as well. I’m coming into Gillman aiming for a top-five result – I feel like I can still achieve that goal even though I haven’t had that much time on the bike as I would’ve liked. Hopefully I can get a top-five and some points towards the championship.”

Larwood, who landed on the podium in his first-ever MX2 appearance at Wonthaggi’s opener, sits eighth in the championship standings ahead of this weekend’s third round.