Multi-time world champion victorious at the second British motocross round. 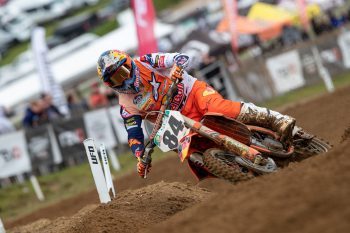 Red Bull KTM Factory Racing’s Jeffrey Herlings admits he battled arm-pump in his first competitive outing of 2021 at Lyng’s second round of the ACU British Championship.

The multi-time world champion hadn’t raced since the MXGP of Citta di Faenza in September last year following the cancellation of many pre-season events, along with the twice-delayed start of the MXGP World Championship.

The 26-year-old put on a strong display of riding across the two motos despite the arm-pump issue, recording a 2-1 scorecard to capture victory via countback after equalling points with Monster Energy Yamaha Factory MXGP’s Ben Watson.

“It was a good day of racing.” Herlings declared. “I had a bit of a problem in the first moto and lost around ten seconds while I sorted out the stone. I came back through the pack but the track wasn’t easy for passing and I finished on the leader’s rear wheel.

“In the second moto I had to come back from 6-7 at the start, although I could reach first place this time. I had a few issues with arm-pump but I guess that’s normal after eight months away from a race! We’ll keep working from here and hope to get a bit better each week until we go to Russia.”

The opening round of the 2021 MXGP World Championship is scheduled for 13 June at Orlyonok in Russia.