Dobson leaving nothing on the table in MX2 title hunt 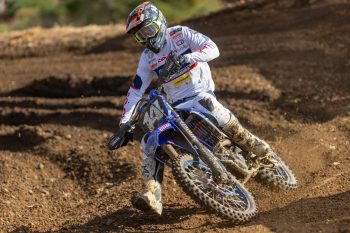 Jesse Dobson is adamant he wants to leave nothing on the table in the pursuit of an MX2 crown in the 2021 Penrite ProMX Championship, the Serco Yamaha rider revealing he made a significant investment to ensure he remained in title contention despite a collarbone injury.

The number 14 broke his collarbone in the lead up to Canberra’s second round earlier this month, electing to undergo surgery and commence a rigorous therapy period to allow himself the best opportunity of lining up behind the gates.

The investment paid off for the Queensland-based talent who would’ve been knocked out of title contention had he missed the ACT round, where he was able to record a critical top five placing which keeps him within reach of red-plate holder Kyle Webster (Honda Racing) in the early stages of the championship.

“My whole thing this year is that I don’t want to leave anything on the table – from my training to my riding,” Dobson explained to MotoOnline.com.au. “Surgery and recovery sessions are a big investment and I didn’t hesitate to take any of those.

“Anything that could help me get to the start line, I was doing it no matter what the price was. It stings, but I don’t want to go to Coolum and wonder ‘what if’. I don’t want to leave any stone unturned for the whole year – hopefully I’m in the title chase going into Coolum.”

Dobson is ranked third in the MX2 championship standings ahead of Gillman’s third round this weekend in South Australia, sitting 33 points behind Webster.