A look back at all five premier class Supercross winners in 2021.

With the 2021 Monster Energy Supercross championship in the history books, MotoOnline takes a look at the 450SX race winners from the 2021 season to weigh in on their victories. 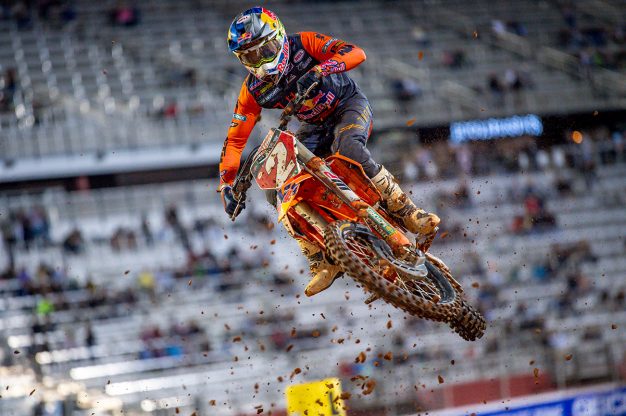 Rider: Cooper Webb
Rating: A+
Rundown: The start of Webb’s season was surprisingly slow with just three podiums and one win in the first six rounds. When the series hit the residency in Orlando though, it was clear that he was the class of the field as he swept both rounds at Camping World Stadium en route to his second 450SX championship. The Red Bull KTM rider managed to grab eight wins, with a few of them in dramatic fashion to say the least. His victory at Arlington 3 was a standout, after getting caught, passed and put on the ground by the Team Honda HRC duo of Ken Roczen and Chase Sexton in the heat race, Webb made a change before the main event that led him to an eventual win. Apart from that, he sent it for the win in Atlanta 3 catching and passing Roczen in the closing moments of the main.

Rider: Ken Roczen
Rating: A
Rundown: Although he might not have won the championship, Roczen’s performance this season was incredibly impressive considering what he’s been through in season’s past. The opposite of Webb, Roczen’s early season form was top notch, taking five podiums with two wins in the first six races and an impressive sweep of the Indianapolis residency. Perhaps the most impressive win of his season though was the bounce-back victory to keep his title hopes alive at Atlanta 2, on the heels of his worst finish of the year with a ninth at Atlanta 1.

Rider: Eli Tomac
Rating: B
Rundown: In what would turn out to be his final season of Supercross on the Monster Energy Kawasaki team, Tomac only showed flashes of what we’re used to seeing from him throughout the season. He managed to stay in the title hunt, notch eight podiums and three wins, but with a stacked class that made rides from 10th to the sharp end of the field difficult, his starts were a killer throughout the season. His triumph at Daytona was a standout for his season, the defending champion tying Ricky Carmichael’s record of five wins at the famed speedway, but the Atlanta 1 thriller with Sexton was perhaps his ride of the season. He chased the young rookie down in the closing stages to set up what looked a last-lap battle. While the battle eventually was thwarted by lap traffic, it was an exciting ride nonetheless. 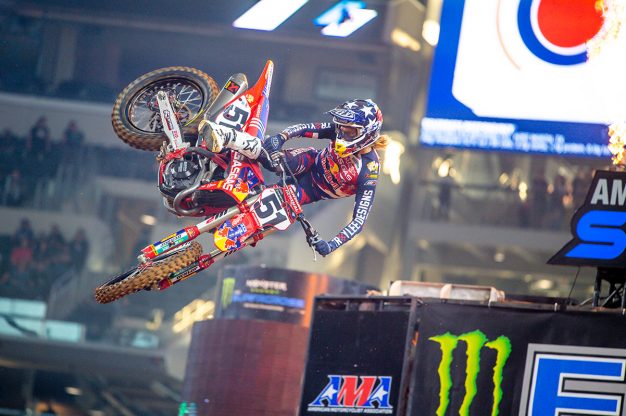 Rider: Marvin Musquin
Rating: A-
Rundown: Red Bull KTM’s Musquin had what I’d call the biggest roller coaster out of anyone this season. A podium at the opening round in his comeback from a 623-day layoff from Supercross action was quite emotional for the Frenchman. It looked like a promising start to his season, but it was quite a series of events before he’d eventually notch his first victory in the penultimate round of the season. He had DNF’s, multiple nagging injuries, a few missed rounds, it was a rough one, but the perseverance it took to take the win with Webb right on his tail at Salt Lake City 1 and to back it up with a second the following weekend was what it’s all about. Here’s hoping we get Musquin in the mix next season as a title contender!

Rider: Justin Barcia
Rating: B-
Rundown: The man, the myth, the opening round legend that is Justin Barcia grabbed his third consecutive opening-round win at Houston 1 in an epic first ride for the TLD Red Bull GasGas squad. While it didn’t pan out in the long run, he managed to stay in contention for the title for much of the season, notching four podiums and 10 rides inside the top five. A rough go at the Indianapolis residency with a 13th and 19th put a big dent in his title hopes, but Barcia was able to contend through the season and it was hopefully a sign of things to come for him and the GasGas squad.