Honda-backed teenager is making waves in his debut MX1 season.

Queensland teenager Jai Walker has stepped up to the premier MX1 category of Penrite ProMX in 2021, the 18-year-old already finding his feet against the nation’s best.

Walker got into dirt bikes after watching Chad Reed on TV as a five-year-old and, soon after stepping into the saddle of a PW50, had already won his first-ever race at Coolum.

From that moment on, he was hooked, and progressed through the junior ranks at a state level, before finishing second to Noah Ferguson at the 2017 Australian Junior Motocross Championship at Horsham in the Mini Lites BW 14-U16 Years class. Soon after, Walker stepped up to the MXD class and finished sixth in the 2019 championship.

The intention was always to then step up to the senior ranks, but the initial plan had been to follow the conventional pathway through MX2. However, Walker soon discovered he gelled with his 450 practice bike more and made the decision to bypass the MX2 class altogether. 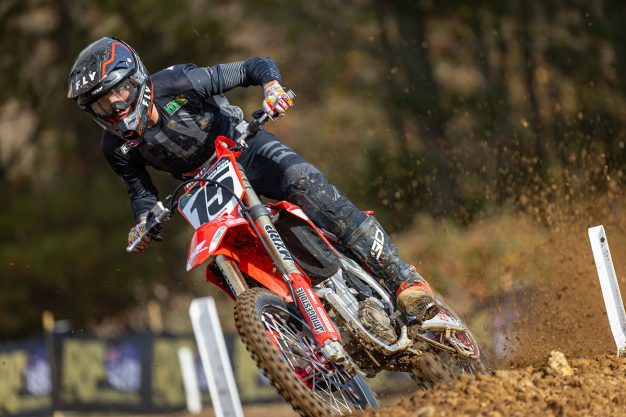 “I was using the 450 as a training bike, but I had to change my riding style quite a lot whenever I got back onto the 250,” he explains. “I just felt a lot more comfortable on the bigger bike and I prefer riding it a gear higher, rather than being super-aggressive on the 250. We decided to stick with the 450 and sell my race bike.”

Lining up this year for the opening round of the ProMX Championship at Wonthaggi, Walker admits to feeling the nerves: “It was pretty nerve-wracking. I was like ‘oh my god, I looked up to these guys two years ago and now I’m actually racing them’. It was cool to be amongst them, but it’s a whole new level to MXD, that’s for sure.”

Walker finished his debut MX1 outing with a ninth overall, then continued his baptism of fire at Canberra. He qualified for the Top 10 Shootout, then overcame an early crash in the opening race to work his way back to ninth before the clock ran out.

“I was pretty happy with that performance, but I really struggled with the back-to-back moto format,” the Honda rider admits. “I had bad starts and it was a hard track to pass on, so I just ran out of time. I’ve been training for 30-minute motos and I’m not a sprint guy – I like to keep chipping away each lap, but by the time I put the hammer down in the shorter races it was too late.”

Despite struggling and finishing the day in 10th overall, Walker moved up to eighth in the points chase and left knowing exactly what he had to work on. Since returning home he’s started working with former Australian MX2 champion Ford Dale and is already noticing an improvement. “Ford’s been unreal and he’s helped me pick up my intensity already,” Walker says. “He knows how to win championships and we have a great programme going now. I ride regularly with Kirk Gibbs and Jesse Dobson at a bunch of private tracks around here, Ford meets me there and passes on his knowledge and advice. I’m really looking forward to the next couple of rounds and putting everything I’ve learnt into practice.”

The upcoming round at Gillman won’t be an easy one, though, as Walker nurses a broken thumb after crashing at the weekend’s round of the Sunshine State Motocross Series at Warwick. Adding insult to literal injury, Walker also lost his handy lead in the series to Lochie Latimer with one round remaining. He’s not too concerned, though.

“I’ll be back for the final round at Toowoomba next month,” he adds. “I’m only 11 points behind Lochie and am confident that the work we’re putting in will pay off.”

As for the rest of the ProMX Championship, Walker is ultimately aiming to finish top six in the MX1 championship, with at least one podium result along the way. If he does you can guarantee he will be firmly on the radar of the factory teams.