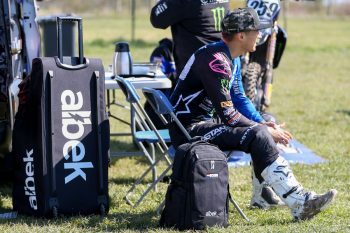 “I want to connect with people who are giving 100 percent,” said Coldenhoff. “I feel like Albek came to me with this intention – willing to grow – willing to do anything and that’s the attitude I also have. It’s a new brand – they have everything I need for all the travelling I do and it’s a nice style, so I’d love to join the team.”

Albek founder, Johnny Mclean, said it was always an ambition to have a rider the calibre of Coldenhoff join the company, explaining the European-based rider represent the brand’s core values.

“When we started this journey of Albek we only hoped we could align ourselves with great humans like Glenn Coldenhoff,” McLean commented. “Glenn is not only our hero but someone who resonates the pillar of our brand – pushing boundaries – challenging the norm – and we are stoked to be able to build products that help support this great athlete.”