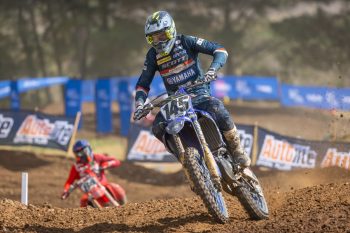 MX1 rookie Maximus Purvis insists the next step in progressing in the premier class is to transfer his qualifying speed into race results, the WBR Yamaha contender displaying strong one-lap speed so far this season.

The 2019 Under 19’s champion, who was fifth in the Top 10 Shootout in Wonthaggi’s Penrite ProMX opener, set the fastest time in the MX1 qualifying session at Canberra’s second before being unable to put down a fast lap in the Shootout.

The New Zealander has recorded 6-14 overall results across the first two rounds, and the international talent now looks to bring some consistency into his racing ahead of third round later this month.

“I had the speed today for a top-five overall finish and I’m disappointed that I didn’t get it done but at the same time, I was in the race and right there with the good guys which is where I want and need to be,” Purvis reflected on his Canberra performance.

“I will learn from it as do my best to eliminate as many mistakes as I can and be consistent in each and every race. The fastest time in qualifying was a bit of a surprise as I haven’t raced here before, so to get a lap in like that was pretty cool. The next step is to transfer that speed into every race and get closer to the front every time I’m on the track.”

Purvis has ranked ninth in the championship standings as the series visit Gillman in South Australia in 30 May.