The Italian set for his 17th season in the world championship. 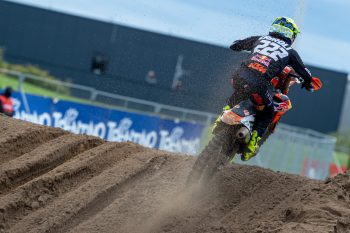 Red Bull KTM’s Tony Cairoli is likely to make a call on whether the 2021 FIM Motocross World Championship will be the last of a virtually unparalleled career after assessing his speed and potential in the forthcoming 2021 campaign.

Cairoli won three Grands Prix in 2020 to take his career tally to 92 and the second-highest in the history of the sport and appeared on the podium seven times from eighteen rounds.

He lost 3rd place in the championship standings at the final round in Arco di Trento. His achievements in his twelfth season in the category and seventeenth in GPs were accomplished in spite of an injured left knee.

After partially corrective surgery in December of 2020, the Sicilian now wants to determine how the joint resists and his competitiveness ranks against the rest of the MXGP field before deciding if #222 will make the gate for 2022.

“I want to see if I can still improve but I know the level of performance is unlikely to go up,” he admitted. “A lot depends on my condition and the knee. That’s why, right now, I don’t know where I am [with speed and feeling] because I still cannot really push because of this injury following me around.”

“Last year was very difficult for me but I think if my knee can be in a bit better shape for 2021 then I should be able to fight for the championship,” he added. “This is my goal and then the next season depends on how I feel.”

Cairoli renewed his contract with Red Bull KTM and the De Carli faction of the squad last summer. He has raced with Claudio De Carli and his set-up since 2004 but the crew took another step towards a ‘post-Cairoli era’ with the signature of promising Italian talent Mattia Guadagnini, who makes his MX2 debut this year.