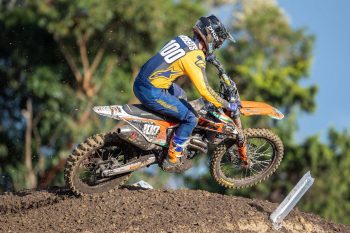 New South Welshman Jy Roberts is adamant on seeking more in his return to national-level racing in the 2021 Penrite ProMX Championship, the 20-year-old coming back from a serious head injury sustained in 2019.

The KTM-supported rider has made a remarkable recovery from a practice crash that saw him spend eight days in a self-induced coma, returning to riding just months later before a pandemic-affected 2020 delayed his racing return in the Australian championship.

The opening two rounds of ProMX have served Roberts with challenging circumstances, recording 14-11 overall results across the two events, prompting the youthful talent to seek more in an effort to become a top-five regular.

“In the first couple of rounds, I wanted to be in the top five – I think my best race this year is ninth,” Roberts told MotoOnline.com.au. “Everyone wants to go out there and win, and I thought I was going to come back and be a top-five guy.

“Round one I was pretty unlucky and had some bike issues in race one, and in race two I got ninth. In Canberra, I had a couple of little crashes in qualifying and had some niggling injuries that I’m still babying. I love this season how there’s a month between rounds, so any little injuries or anything you need to work on, there’s plenty of time before the next round.

“For round three, I’m training really hard and working on my weaknesses so I can come out swinging and get into the top five. It’s a process – especially from the injuries I’m coming back from – no one has ever really come back from those injuries, so I’m just thankful and blessed that I still have KTM’s support, a great team behind me and that I can race most weekends.”

Round three of the ProMX Championship will be staged at Gillman in South Australia on 30 May.