Former MX2 champion training with Josh Coppins to get campaign back on track. 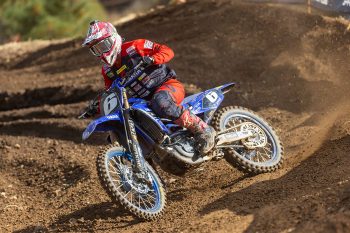 Fresh off a MX2 podium at the second round of the Penrite ProMX Championship in Canberra, Yamalube Yamaha Racing’s Jay Wilson has flown back across the Tasman to continue working with mentor Josh Coppins in New Zealand.

Wilson, 26, experienced a disappointing start to the ProMX series with a distant seventh overall at Wonthaggi. Realising something needed to change, he promptly booked flights to stay with Coppins at his Motueka base.

“The last time I worked with Josh I won a championship and I’ve always loved working with him, basing myself at his place and riding his tracks,” Wilson told MotoOnline.com.au. “The travel bubble opening up between Australia and New Zealand meant it was possible to base ourselves there for a month or two and fly back for a Canberra and again for Gillman at the end of the month.”

The results turned around instantly on Sunday as he ripped to a hard-fought second place in the opening race, then sixth in the second moto, on his way to third overall.

“Honestly, a lot of the improvements have been psychological, rather than technique or fitness,” Wilson explained. “My speed is good, but I needed a change of scenery and to surround myself with good people who want the best for me. Being based in the South Island ticks all the boxes – I just love it here.”

On Wednesday Wilson flew north to stay with former world champion Ben Townley and ride a range of tracks in the North Island while the weather stays settled: “The tracks here are so good at the moment and I’m looking forward to putting in laps on some tracks I haven’t visited before as we get ready for Gillman.”

Wilson’s initial plan is to remain based in New Zealand until Gillman, but is keeping options open if the Kiwi weather continues to work in his favour.