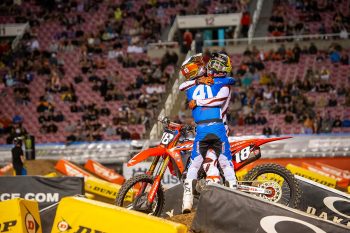 Younger of the duo, Jett, charged to his third win of the 250SX East season and earned third in the final standings, while Hunter’s P3 result was enough for him to hold onto runner-up in 250SX West for 2021.

It’s a result that further signifies the arrival of both Lawrences, the 17-year-old Jett regarded as the sport’s brightest young talent, while at 21 years, Hunter has proven his potential in Supercross after injuries affected his previous campaigns.

“Coming into the weekend, I was excited for the Showdown with my brother Hunter and couldn’t wait for the main event,” recalled Jett, who was struck by illness prior to the main. “In the first qualifier I got P1 and was feeling a little better on the track and started to get a good flow. The second qualifier was pretty good also.

“Going into the heat race I was pretty excited to get it underway and it went pretty good. I got second in the heat and ended up getting the third gate pick for the main. I was throwing up all through the break to the main, so I was a little nervous and didn’t know how I’d do.

I was able to dig deep and kind of focus and came out with a win. I was super-pumped from how I was feeling before the race and to top it off Hunter got third; it was awesome for both of us to be on the box, so the last round ended pretty well, I think.”

Hunter managed to rebound from an early incident in the 250SX Showdown, quickly remounting and putting on a charge to pass Cameron McAdoo (Monster Energy Pro Circuit Kawasaki) on the final lap and securing second in the championship as a result.

“I got P2 in the West class championship, so that was really cool and I’m stoked on that. In the main event I was in a really good position and just rushed a pass for third and washed the front-end out. I dropped back to fifth and took a lap to regroup and breathe, then put on a push and got myself into third on the last lap.

“The track wasn’t something you could really send it on, so it was definitely about patience and a lot of corner speed – you had to execute your corners really well. Obviously, Jett and myself both getting on the podium was really special.

“What a way to finish out the supercross season! The team and everyone was really happy with that, and I can’t thank the team enough, they’re like a family and they’ve been awesome, so I’m looking forward to the outdoors and just happy to end it on a solid note. Obviously we would’ve loved to win, but I’m looking forward to going racing again shortly.”