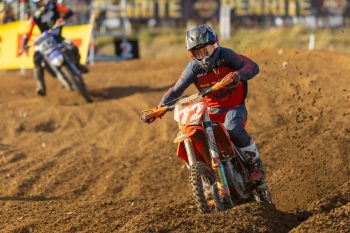 Premier class rookie Regan Duffy has made a point to maintain the championship lead two rounds into the 2021 Penrite ProMX series, the teenager silencing critics after a podium display in hard-pack conditions.

The KTM Racing Team contender, who opened the season with an overall victory in Wonthaggi’s sandy conditions, saw his ability to maintain such form on a hard-pack circuit come into question, however the Western Australian responded by putting his red-plated KTM 450 SX-F on the box yesterday.

The confident 18-year-old charged to third in the opening encounter before lodging a 2-4 scorecard in the all-new back-to-back sprint format, granting him the final spot on the podium while allowing him to stretch his points lead to seven over defending champion Todd Waters (Husqvarna Racing Team).

Duffy indicated maintaining the red plate was a key target in the ACT, where he didn’t want to become another rookie to let the series lead immediately slip away after just one round.

“Today was good, but I’m a bit disappointed that I didn’t win, as that’s what I train for and that’s what we came here to do,” Duffy commented. “However, you can’t go wrong with a podium and I’ve still got the red plate, so I’m stoked with that.

“I feel I made a lot of improvements in my riding on hard-pack surfaces, so that’s another positive to take away. A lot of rookies come out firing, get the red plate, then lose it straight away, so I made it a point to myself that I’m going to try and keep it.

“I had a consistent day and finished top five in all my motos, so I want to continue that through the year. Today I tried hard to get good starts and battle up front, so it’s been a solid day.”

While Duffy was able to increase his margin over Waters on Sunday, Monster Energy CDR Yamaha duo Luke Clout and Hayden Mellross were able to make up much-needed ground with a 1-2 overall finish.