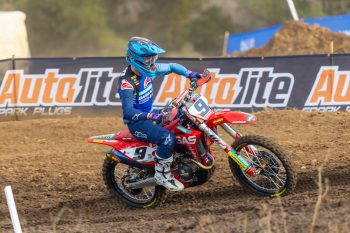 The MX1 debut of Aaron Tanti at Canberra’s second stop of the 2021 Penrite ProMX Championship served up mixed results for the GasGas Racing Team contender, however he’s extracting the positives from what was a trying day.

Tanti was forced to miss the season-opening round last month in Victoria as he overcame a wrist injury, although his preparations for a return in the ACT over the weekend were further interrupted after a practice crash saw him undergo surgery late last week to remove a fingernail.

In his first appearance for GasGas, Tanti salvaged 8-13-9 results across the opening moto and a pair of sprint races, granting him eighth overall – the final outing of the day encouraging the MX1 rookie after running up front in the early stages.

“Today definitely wasn’t easy for me, but it was positive in a lot of ways,” Tanti indicated. “I came in pretty beat up from a practice crash, but I started the day well with a fifth in qualifying.

“I had a few crashes throughout the day, but it was encouraging to run near the front of the field in the third race before I had a mishap. I’ve only had a week on the bike and this is my first outing on the GasGas, so I’m happy with how it all went, all things considered.

“I know the things I need to work on, so the next four weeks will be really important for us leading into the third round at Gillman.”

Tanti has just under a month to prepare for the next round of ProMX, scheduled for 30 May at Gillman in South Australia.