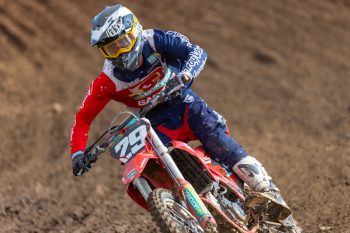 A pair of third-place results amounted to a career-first MX2 podium for rookie Noah Ferguson, the GasGas-mounted rider experiencing a turnaround performance at Canberra’s second round of the 2021 Penrite ProMX Championship on Sunday.

The youthful Queenslander endured a challenging opening round last month in victoria, mustering up just 10 championship points with a 13-DNF scorecard.

It was a drastic turnaround in the ACT for Ferguson, who after claiming an impressive second overall result, suggested an anticipated maiden podium would come further along in the series after his difficult start to the championship.

“I’m pretty pumped with my first P2 in MX2, which was only my second race in that category,” Ferguson told MotoOnline.com.au. “The podium hasn’t surprised me – it was always the goal and the intention to be on the podium, but after round one, it was more of a doubt.

“I knew that’s where I needed to be, and it was a bit of a breakthrough ride to be on the podium so early. I’m always driving to be better – I’ll just take it week by week, and try to get better and be more consistent – that’s been the biggest downfall in my years of racing. I’d say it’s flipped a few goals around.”

The breakthrough result now sees Ferguson ranked seventh in the MX2 championship standings as ProMX visits South Australia for the next stop on the calendar, scheduled for 30 May.