This weekend to mark debut of GasGas Racing Team in Australia. 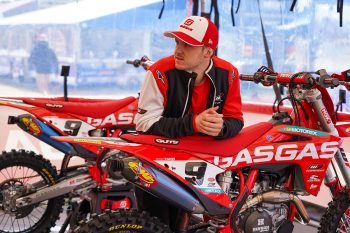 The anticipated factory GasGas Racing Team debut will finally go ahead at Canberra’s second round of Penrite ProMX after the highly-rated MX1 rookie was forced to watch from the sidelines at Wonthaggi.

Tanti has now recovered enough from his broken wrist to return at round two, which will also mark the first time that GasGas has fielded a factory team in the Australian Motocross Championship under KTM Group ownership.

Despite spending little time on the bike in the lead-up, the 24-year-old is expected to make his presence felt on Sunday where he will also wear the number nine for the first time at a national level. He has also had to recently overcome an untimely finger injury in the lead-up to his return.

“I’ve got about four or five rides in now, so not a lot of time, but I got cleared to ride and have been managing coming back,” Tanti told MotoOnline. “All in all, I feel good enough to race, so am going to give it a crack. I want to get out there, have a feel for racing my first national on a 450, see how it goes.

“Sitting at round one watching was definitely hard. You see the competition and kind of picture where you’re going to sit and I think I would have been in a pretty good position around Wonthaggi. So that was hard to watch, but it’s good to be back.

“I’m not carrying any real expectations into this weekend, I haven’t been on the bike a lot and had my fingernail removed after an incident this week, which isn’t a problem at all. I just want to get a good start and I do see myself in the top 10, no worries in the world, but that’s where we will leave it at for now.”