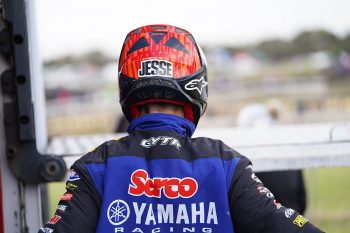 Lap one of MX2 practice at Sunday’s second round of Penrite ProMX will be telling for Serco Yamaha’s Jesse Dobson as he attempts to ride less than two weeks after having a broken collarbone plated.

The Queenslander finished fourth at the opening round of the season and is determined to score more points in Canberra, despite being injured at Coolum following Wonthaggi’s season-opener earlier this month.

It would be a remarkable effort if Dobson is to overcome the injury, which he says he has been doing everything that he can to speed-up the healing process between rounds. The real test will come at the beginning of the 8:00am practice, however.

“First lap of practice will be the real test,” Dobson told MotoOnline. “I have been just trying to give it as long as possible to heal before I try go racing. I’ve been doing everything I can all week with my trainer/physio to help promote healing and each day has been better than the last. We won’t know how it will hold up until the day of the race.”

Dobson is regarded as a chance of challenging for the MX2 championship this season, his first at a national level with Serco Yamaha after joining the organisation last year. He narrowly missed out on a podium at round one after lodging 4-3 finishes that weekend.