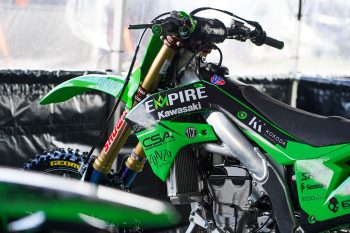 Japanese champion Haruki Yokoyama’s debut in Penrite ProMX has been delayed until round three as the Empire Kawasaki signing continues to complete a compulsory hotel quarantine period.

Yokoyama arrived in Australia last week and is undergoing two weeks of quarantine in Sydney, now due to join the factory-supported team at Gillman on 31 May.

It was initially hoped that the two-time and current All-Japan MX2 Championship winner would be able to debut in Canberra this Sunday, however, Yokoyama’s later arrival into the country will instead see him on-track from round three.

“We are planning to get out of quarantine on the 6th of May, so will start riding after that,” Yokoyama explained. “Luckily I got a bigger room while in quarantine, so I can jump rope, balance ball, core training, little bit of running and other training.”

Yokoyama said it has been a challenging week in the confines of a hotel room upon arrival, but looks forward to experiencing the country once able to: “14 days quarantine is tougher than I thought. I can’t wait to go outside, breathe fresh air and see Australia.”

As part of a program to further develop his craft in the Australian championship riding the new Empire Kawasaki KX250 in MX2, Yokoyama is eager to get down to business late next month.

“I am looking forward to competing with the fastest MX riders in Australia,” he added. “One of the main reasons I came to Australia was to learn more and improve my skills on and off the motocross track.

“I also wanted to give a quick thank you to all my sponsors and Kawasaki Heavy Industries for giving me the opportunity to race in the Australian series.”