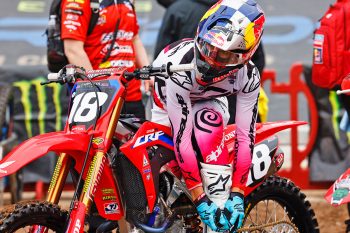 Lawrence, 17, made a late move for second in the closing minutes of the main event on Saturday night, with Mosiman attempting to counter almost immediately.

That attack came at the displeasure of Lawrence, who signaled his frustrations over the finish on that same lap and later voiced his opinion on the matter with 21-year-old Mosiman as tensions continue to escalate between the pair.

While Lawrence continued his charge toward the front and only just fell short of the victory, which instead belonged to Jo Shimoda (Monster Energy Pro Circuit Kawasaki), Mosiman faded to a distant fourth despite recording the quickest lap of the race.

“Now you understand what type of rider he is,” Lawrence said. “I passed him clean and in that next turn he kind of came and felt like was going to t-bone me. Luckily I committed, so over the finish-line, I showed him that he was number one and left it at that.

“Now you guys understand why I took him out at Houston. If you don’t bump him and make sure you get a gap on him, he goes for your front wheel – he’s just that type of dumb rider.

“As you seen, I passed him clean, didn’t do anything dirty and he goes straight for the almost t-bone, could have ended my night and, even worse, both of our night and I could have been injured. It shows how brainless he is and I just had to show he’s the number one rider of that list, so yeah.”

It’s not the first time Lawrence and Mosiman have made headlines or contact on-track, with Lawrence taking Mosiman down at Houston 3, before the latter retaliated in their heat race at Indianapolis.