Determined Dobson in for Canberra despite breaking collarbone 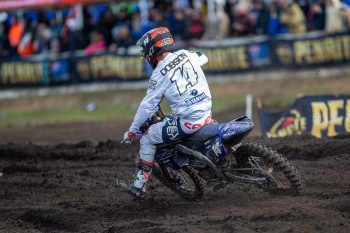 Serco Yamaha racer Jesse Dobson is determined to line up at the second round of the Penrite ProMX Championship at Canberra next weekend despite breaking his collarbone last Sunday and undergoing surgery.

While chasing down MX2 leader Jay Wilson (Yamalube Yamaha Racing) in a Sunshine State MX Series at Coolum, Dobson got out of shape and hit a mound of dirt on the side of the track and went down heavily.

“The mound of dirt was in a funny spot and I got squirrely and hit it fourth pinned,” Dobson told MotoOnline. “It was a big crash – I went over the bars and it rattled me pretty hard.”

Hospital scans cleared Dobson of initial injury concerns to his leg and pelvis, but determined he’d broken his collarbone and taken a knock to the head. His collarbone was plated on Wednesday and he returned home yesterday afternoon.

“Plating it speeds up the process, but we’ll still be relying on the hardware to hold together at Canberra next weekend,” he continued. “I’ll be there to try and get as many points as possible and stay in the MX2 championship hunt. I’m trying to keep a positive outlook on it all.”

The capable Queenslander finished fourth overall with 4-3 results at the opening ProMX round at Wonthaggi two weeks ago, ticking off his goal of finishing inside the top five.

“I was a bit bummed to not be on the podium, but we scored good points,” said Dobson. “In the second race I was pressuring second, but got caught up in lapped riders. A younger Jesse Dobson might’ve forced the issue, but I probably would’ve ended up on my head. I feel my mindset has matured and I’m looking at the big picture a lot more this year.”