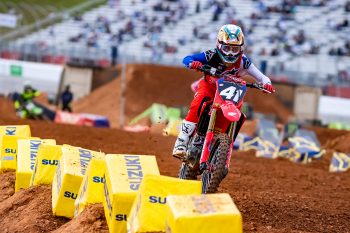 Team Honda HRC’s 250SX West rider Hunter Lawrence had a bittersweet day at Atlanta 3, with pace to compete for the win, his race was stifled by an incident with Cameron McAdoo during the main event.

As the Monster Energy Supercross series kicked off the final race of the Atlanta Motor Speedway residency, it looked to be Lawrence’s race to lose, qualifying fastest on the day and winning his heat race as he looked to grab the second win of his career.

As the gate dropped on the main event, Lawrence found his way into second place just before a red flag put the race on hold. As a dismal restart saw him playing a bit of catch up, he caught the back of McAdoo, eventually crashing in effort to avoid landing on the Kawasaki rider.

“After the restart,” Lawrence explained, “I came through the pack in fifth and then Cameron [McAdoo] nearly fell off his bike going into the sand section. I don’t think he was where he needed to be, mentally or physically.

“He swerved right in front of me, and my only options were to either land on him or try to scrub off the track and miss him, and that’s what I did and ended up landing in the Tuff Block.

“I’m pretty frustrated about that; with that crash, to finish two seconds behind third place, I think I could’ve won, considering how good I was in the whoops and how good I was feeling.”

While disappointed, the 21-year-old Australian is happy with his overall performance and looking forward to getting back on track in Salt Lake City in two weeks time.

“I’m pretty bummed with how the night ended,” he continued, “but stoked with how the team and I operated during the day and how my riding is going, so I can’t wait for Salt Lake City.”