KTM Racing Team’s Daniel Milner has begun 2021 in the same dominant form he showed last year in the Yamaha Australian Off-Road Championship (AORC), with a resounding E3 win – also fastest of all outright – in the opening two rounds at Golden Beach. MotoOnline caught up with him shortly after racing wrapped up on Sunday for a Conversation of his weekend. 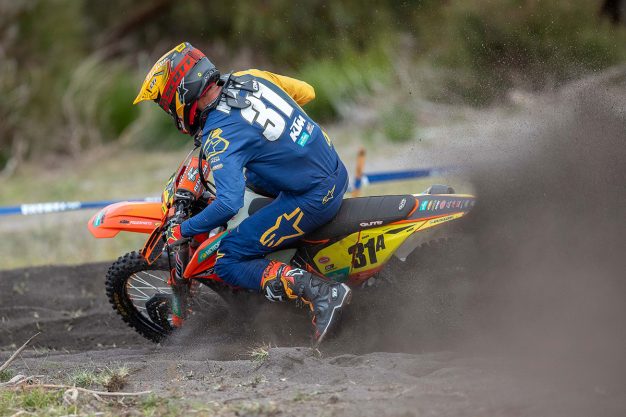 After a very short 2020 series you’re the reigning champion, but how were the nerves leading into Golden Beach, especially as the original season opener at Nowra was postponed due to bad weather?

Oh, there were definitely nerves, no two ways about it. But after watching the Penrite ProMX opening round at Wonthaggi last weekend, then seeing the track set up here at Golden Beach, I was so excited to go back racing. I don’t think I’ve ever had a year off with no racing and I didn’t race any state rounds leading up to this weekend, so it really was jumping straight back in the deep end, but once I got on the bike and the clock started, the instincts kicked in and I did what I needed to do. Showing up here, I expected myself to win as much as my team did and I put pressure on myself after doing well last year. This is also my home round and I wanted to really come out swinging.

You had to roll with the punches as well, as the three-hour Cross Country race planned for Saturday was altered to a Super Sprint format, then Sunday’s racing was a series of shorter timed laps. How hard was it to adapt to the varied race formats?

Yeah, due to the dusty, dry conditions it wasn’t possible to race the Cross Country format on Saturday, so they changed it to two 25-minute Sprints, which is still a full moto at the nationals. I definitely didn’t pace myself at the start and went too hard, but I got a really good time and I didn’t expect to beat everyone by so much. In the second Sprint I tried to ride my own race and keep it clean and finished that one 43 seconds ahead of Todd Waters for the outright win. Sunday’s short loops started off really fast, with no big bumps, as the club had prepped the track that morning. By the end of the day it was really rough, though. I set the fastest time on each lap except for one where I tipped the bike into a corner too hard and did a big flying-W over the bars into the scrub. That made me check up a bit and I just tried to get through the rest of the day without any mistakes. I ended up with a decent lead outright and won my class, so I’m absolutely stoked to be back where I left off last year.

This was the first time the AORC has visited Golden Beach. What are your thoughts on it?

Considering how dry the area is, I thought it was an awesome weekend. Six weeks ago I came out with the bobcat and played around with the track to open it up a bit, and I think that really helped the racing. The venue is unbelievable, but it was unfortunate that we hadn’t had any rain, which changed the formats around. I think that with the rough, deep, sand we raced, this will be one of the gnarliest rounds of the season – I’d love to see the series return here in the future. 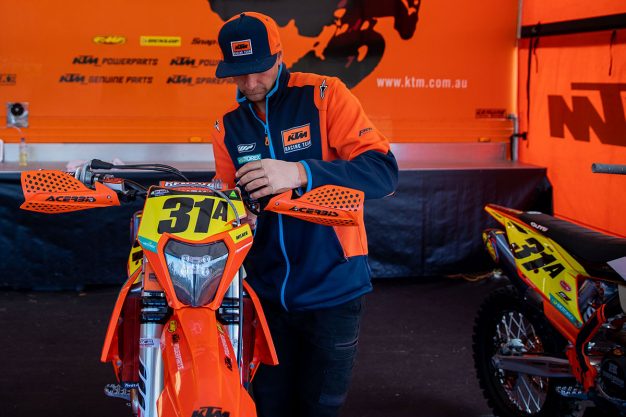 Who’s surprised you with how much they’d stepped up their pace over the past 12 months?

I’d have to say Todd Waters. To be honest, he’s stepped it up a lot and came out of the blocks really fast. This was a track that suited him well and I knew he’d really be able to swing off it – he beat me in the test where I crashed and he was never far off my times. As he gets more used to the AORC I think he’ll only get faster, too. I thought Mason Semmens rode unreal as well. Considering he was riding a 250F in the deep sand, he was on it, which was cool to see.

The championship takes a bit of a break from now until July. What are your plans over the next three months?

I still have to talk to KTM about it, but I’d love to line up for a motocross race or two, just to keep the momentum going. We need to do something – Todd’s still going to be racing and I don’t want to relax or let him gain an upper hand by getting more race time than me. Outside of that, the biggest focus for us is the Hattah Desert Race at the start of July. We’ll be testing and prepping for that to make sure we’re ready to defend our 2019 title there.