Red Bull KTM’s Cooper Webb took control of the 450SX championship with a late-race charge to pass title rival Ken Roczen for the win in the last of three Supercross races in Atlanta Motor Speedway, while Nate Thrasher won again in 250SX West.

It was a thriller of a night in Monster Energy Supercross, as the series completed it’s final residency of the year with a race that saw Webb come out on top and take a 16-point advantage in the championship standings with two rounds to go.

Off the line, it looked to be all Roczen, as he jetted out to the lead that eventually ballooned to over 10 seconds. It was his race to lose and a late-race crash in the whoops saw his lead chopped in half with just a few minutes remaining on the clock.

Webb, who was maintaining second place, saw the gap close and began to charge, eventually catching Roczen with just 90 seconds and a lap to go. He made quick work of his rival, taking the lead and gaining a two-second advantage.

A late-race bobble allowed Roczen to close, but in the end, it was all Webb taking the victory. Roczen was second and Tomac rode to a solid third-place finish.

Tomac’s podium was the result of a charge through the pack, battling much of the race with Aaron Plessinger (Monster Energy Star Racing Yamaha) and Justin Barcia (TLD Red Bull GasGas). Plessinger was up front for most of the race after grabbing the holeshot, the Ohio rider eventually finishing fourth on the night.

Barcia had a solid pace and was able to salvage a fifth place eon the night ahead of a charging Malcolm Stewart (Monster Energy Star Racing Yamaha). Seventh went to Stewart’s teammate Ferrandis, who was actually in the lead group early on before crashing with Jason Anderson (Rockstar Energy Husqvarna) in the opening laps.

Chase Sexton (Team Honda HRC) looked promising through the first half of the day, taking second fastest qualifying time and winning his heat race, he eventually finished 10th on the night.

The series now heads to Salt Lake City for the final two races of the season, with Webb on top by 16 points over Roczen. Nate Thrasher transferred from the LCQ to take the 250SX West main event win in the final round of racing in Atlanta ahead of Justin Cooper and Seth Hammaker, while struggles continued to plague championship contender Cameron McAdoo.

It was a wild night of Monster Energy Supercross racing for the last three rounds at Atlanta Motor Speedway. Battered from a qualifying crash, Monster Energy Pro Circuit Kawasaki’s McAdoo lined up hoping to keep his title chances alive.

As the gate dropped in the main event, he instead found himself at the center of another crash that caused a red flag in the opening lap of the main.

This added frustration for Cooper who had grabbed the holeshot and got out to a lead in the opening lap, but he made it happen again in the restart, taking the lead early on.

A mistake in the opening laps allowed Thrasher to take the lead and he never looked back, winning his second race of the season and career. Cooper rode consistently to finish second place on the night, collecting valuable points in the championship.

Hammaker managed to grab a podium finish after nearly hitting the ground in the whoops with Jalek Swoll, the rookie taking his third podium of the season.

Hunter Lawrence charged through the pack to finish fourth after a crash early in the race. The Team Honda HRC rider continuing to show serious speed, setting the fastest lap time of the night.

Rounding out the top five was Kyle Peters (Phoenix Racing Honda) with an impressive ride, taking the spot in a late-race battle with Jalek Swoll (Rockstar Energy Husqvarna) who took sixth.

Enzo Lopes (Phoenix Racing Honda) notched his best finish and first top 10 of the season in seventh place, with Mitchell Harrison putting his Muc-Off Honda in the top 10, finishing eighth.

Dilan Schwartz had a career-best night in ninth place on his BarX Chaparral Ecstar Suzuki as Coty Schock continued his run of solid form finishing in 10th on the night.

Cameron McAdoo ended one of the toughest weeks of his career battered and bruised down in 13th place. The title hopeful crashed hard in the final moments of qualifying today, aggravating injuries sustained in his Tuesday crash in round 14.

It didn’t get any easier for him in the main event, taking three more substantial crashes and coming away from the night 16 points down on points leader Cooper with just one round to go.

The 250SX West series now takes a one-week break while the 250SX East championship gets back to action, their final race set to take place on 1 May in Salt Lake City. 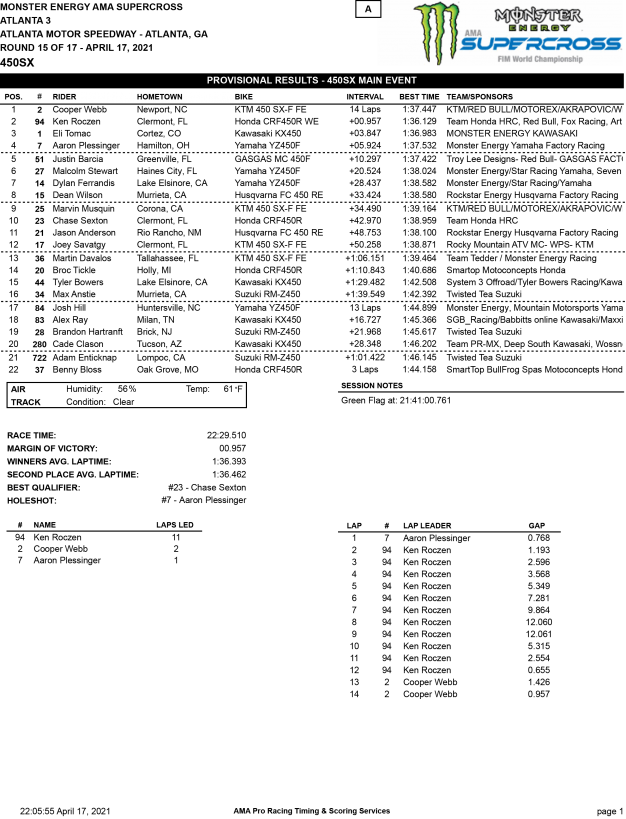 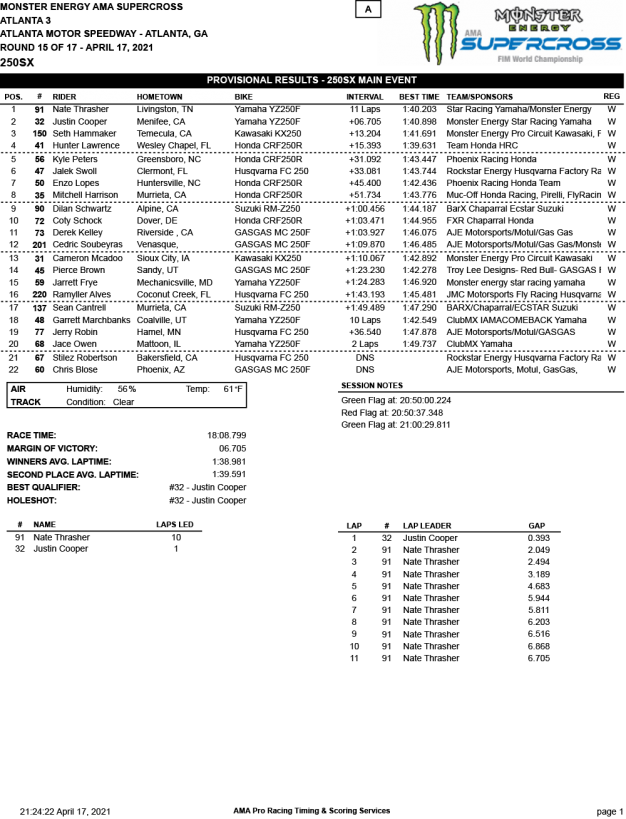